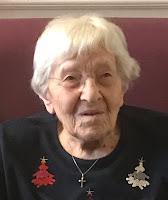 When my ninety six year old mother fractured her pelvis (by falling after a jamboree at the retirement block) I found myself stranded solo in Leeds and under bombardment from our large extended family for news.

So we set up a WhatsApp group and invited three generations of family to come on board. The interaction was brilliant.  Why hadn’t we thought of it before?  Photos of our beloved matriarch in hospital gown solicited much sympathy, with promises of prayer – mostly from the older generation I noticed.

Mind you it wasn’t for everyone.  One sibling had opted out of the electronic age on retirement and a brother in law left the group, unable to cope with the volume of traffic.

Things settled down with steady news updates from me.  On day two I visited to find Mum in adversarial mode, refusing all pain relief and eating a hearty main course followed by steamed pudding.  This was good, came the responses.  But I was not so sure.  I was right. 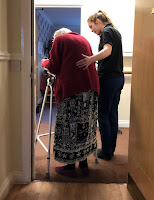 Under normal circumstances, mother found time to read her Bible and pray down the long list of family members.  She had undertaken this in tandem with Dad until he died just after wedding anniversary number seventy two.  Faithfully, over the next five years, she continued alone, alongside a hectic social life that trumped mine. 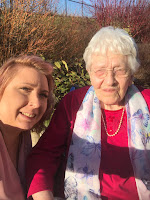 Now, the same prayer targeted recipients responded by WhatsApping photos of various family antics, including those of the great grandchildren.  They brought a smile to her face and helped through the grim, pain wracked weeks of getting back on her feet. 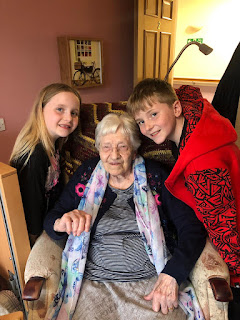 Once home, with 24/7 family support, it became evident that managing in her flat was no longer an option.  Could we really be talking residential care?  If so, which home, where?  The WhatApps continued to allow an interactive  conversation through a series of falls, paramedic call outs and challenging personal care issues.  Some of the younger family members were now offering prayer.  We were in it together.  This was one special, much loved, senior family member.  Everyone could recall being rescued by her in time of need.  We all owed her the best.

After prolonged and intensive family research, Mum chose placement in a state of the art care home with an overtly Christian ethos. Back on home ground she has settled in well and enjoys visits from four generations of her precious family.

The WhatsApp group has served to bring us together in new ways and kept our beloved matriarch in the loop through sharing photos and news.  With social media getting such an adverse press, how great to be able to tell a more positive story. 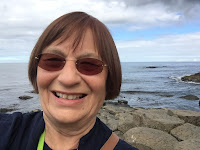 Eileen Padmore has retired from a life spent in health care and academia, having worked in Sierra Leone, Zambia, Eire and Northern Ireland (in the troubles) as well as inner city Birmingham and Leeds.  She has had articles published in Woman Alive, Christian Writer and contributed to the popular ACW Lent Book.  Last November she claimed NaNo 2018 winner at first attempt.  Married to a professional musician, the family includes a feisty springer spaniel and a large African tortoise.