By Philologus - March 24, 2019
How do you feel about the writing of a new Narnia adventure, fifty-six years after C. S. Lewis’s death? Apparently, it fills in the gap between the events of The Magician’s Nephew, when Narnia was created, and those of The Lion, the Witch, and the Wardrobe, and, among other things, explains the origin of the Stone Table. It was written by the Christian apologist and historian Francis Spufford, but because he has not received the go-ahead (or indeed any response) from the Lewis Estate, it cannot be published. He has circulated copies to friends, and some who’ve read it say it’s very good and captures the authentic spirit of Lewis.


He wrote it because his children wanted more about Narnia. And the desire to hear more about much-loved characters and scenes is one we’ve all felt. It’s reflected in lots of different kinds of book, so diverse that I’m not sure whether or not they form a single genre. So, there are the books that give us another story about X. At least one of our own ACW members, Adrianne Fitzpatrick, writes stories set in the world of the much loved Chalet School series. David Benedictus recently wrote Return to the Hundred Acre Wood, a sequel to the Winnie the Pooh books. P. D. James wrote a sequel to Pride and Prejudice, called Death comes to Pemberley. Moving a bit further from this model, Jo Baker wrote Longbourn, an eye-opening retelling of the same Austen classic from the servants’ point of view, and a little group of well-known authors reset the Jane Austen stories in modern times, including Alexander McCall Smith and Joanna Trollope, who respectively retold Emma and Sense and Sensibility. 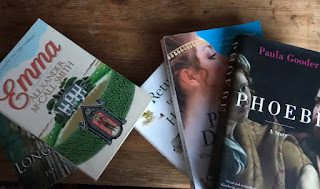 Travelling in a slightly different direction, but still, I feel, with a similar motivation, we have the many reimaginings of biblical stories as novels. There are more than could be listed, but a very famous example is Francine Rivers’s retelling of the book of Hosea, Redeeming Love. And because there are such wonderful personalities and inspiring events in Scripture, we all like to read novels with an invented story placed in a biblical setting and featuring some genuinely biblical characters. This type goes back a long way: in 1880 Lew Wallis published his best-seller Ben Hur: a Tale of the Christ, said to have been the most influential Christian book of the nineteenth century. (And I do wonder whether perhaps this is what the so-called pseudepigraphical lives of the apostles and saints from the second, third, and fourth centuries really were.) Today we have the exciting Pilate’s Daughter, by our own Fiona Veitch Smith, and the enthralling Phoebe: Pauline Christianity in narrative form, by the leading theologian Paula Gooder, which, through the eyes of a member of St Paul’s circle, brings to life the early Christian community in Rome, as they read the letter she has brought from him to them.


These all — from children’s book to ‘tribute’ classic to biblical reimagining — have a strong motive in common. I think we could call it love. We love these people we have read about so much that we want more of them. In this very ACW blog a year or so back I stumbled into the genre myself. I wrote about how much I loved the letter of St James. I soon realized that some of the teachings in this letter seemed to contain little stories, so I decided to make them explicit, and suddenly I had a character and a background into which the rest of James’s teachings could also be placed in a narrative format. The result was The Wisdom of Yakob the Elder, which I trust will be published by Hodge Publishing later this year!