Daring to be vulnerable by Tracy Williamson

A few days ago I posted in the ACW group how I'd been struggling this year; feeling disconnected and sad that I was not engaging more with the group.  I felt very vulnerable making that post as I'd wanted to share how excited I was to have achieved something amazing.  I wanted to post celebration and joy, not weakness and struggle.  Yes weakness and struggle were all I could share at this time.  I felt vulnerable but I received such lovely responses which made me realise I was not alone in my weakness, that others are struggling in that way too. I felt deeply comforted and shortly after, while having a conversation with a dear friend, I was taken further along the path that its ok to be vulnerable. We'd started off chatting lightly about this and that   and then suddenly she asked how I was, really.  She wanted to know, not just the standard response, 'Oh, I'm fine thank you,' but actually how I was.  She cared enough to ask and her care brought alive a response
Post a Comment
Read more

The Spaces in Between — Part 2: Spiderman and the Holy Spirit, by Sarah Sansbury 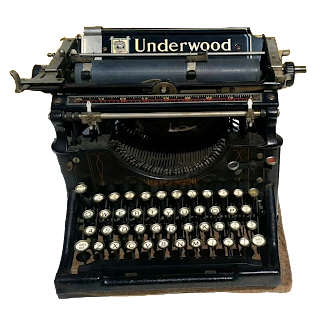 This week I have been reading about the finer points of punctuation in Lynne Truss’s excellent book, “Eats, Shoots and Leaves” [1] . Like her I groan inwardly at the greengrocer’s shop blackboard offering ‘potatoe’s’ and the nightclub poster proclaiming that ‘Thursday night is lady’s night’ (lucky lady). Ms. Truss admits to brandishing a cut-out apostrophe on a stick once in front of a cinema which was showing the Warner Brothers’ film   Two Weeks Notice . Creative punctuation has become the order of the day. As Father Ted might say, “Down with this sort of thing!”. As writers, of course we cherish the tools of our calling: vocabulary, punctuation, grammar … Nonetheless, I was intrigued to read this quotation by Dylan Thomas: “The best craftsmanship always leaves holes and gaps in the works of the poem so that something that is not in the poem can creep, crawl, flash, or thunder in.” In the same way, could it be that the spaces between our words might open windows of opportunity for
12 comments
Read more 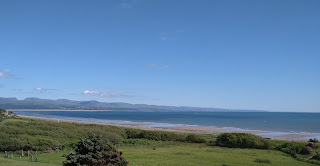 I am very blessed to live by the sea, and close to the mountains of Snowdonia. I have always loved walking on the beach, especially when the sand is sun-warmed and the sky blue, the sea breeze gentle and the waves quietly lapping. When the tide is out here you can walk for miles it seems, and it is easy walking. My husband prefers the challenge of the mountains, or he did in his younger days. More than once he tried to convince me that scaling a steep mountain ridge, scrambling across loose scree slopes, and climbing over craggy boulders was worth all the effort when you finally reached the mountain peak with it’s panoramic views. Needless to say his idea of a ‘walk’ and mine differed somewhat.  These days I can’t actually do either easily, and I miss walking. (Yes, I even miss the hikes!) But I am content, that even with my physical limitations I can still see both beach and mountains from my home. I can sit writing every day with that view, even when I can’t get out there to enjoy
10 comments
Read more

Tales for the Times 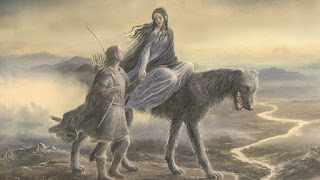 Very likely you, my minute band of readers, are tired of hearing me talk about J. R. R. Tolkien. I’m going back to him again simply because I consider his writings a prime example of the kind of fiction that we need at this time. Quite early in The Lord of the Rings , Frodo and his companions are travelling through the wilds with the awareness that fearful enemies are in pursuit of them. As the night falls, and the feeling of isolation and danger increases, Aragorn, their guide, tells them stories to keep their minds from fear. But when one of them asks to hear a particular ancient story, he advises against it, on the grounds that it tells too  much of the darkness which their present enemies serve. It might undermine rather than fortify their mental resistance. ‘If we win through to the house of Elrond, you may hear it there, told in full’, he says. Instead, Aragorn tells them the ‘Tale of Tinúviel’, which, though sad, ‘as are all the tales of Middle-earth’, is able to lift up their
5 comments
Read more

The Joy of the Lord is my Strength by Rebecca Seaton

The Joy of the Lord is my Strength by Rebecca Seaton Like me, you may have heard this in church sermons or in worship songs. It certainly sounds encouraging: joy = strength: who doesn’t love a punchy one syllable message? Joy/Lord/Strength is easy to remember. But what does it actually mean? In Nehemiah 8:10, where this verse appears, it is the word of God to a disobedient people. God is reminding them that He loves them (takes joy in them) and that they can draw strength from this. Strength also has a much wider meaning than the physical strength that we might think of immediately today. Here, it speaks of a place of refuge, a security that comes from knowing God truly loves us, no matter who we are or what we have done. I wanted to explore what this means for my life and what it means in my writing but found I can’t really separate the two. The nearer I draw to God (and believe me, it’s a process!), the more my own journey spills out into my writing. Although my writing isn’t o
3 comments
Read more

Be a Raven, by Emily Owen 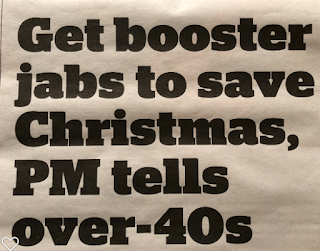 (Text: Get booster jabs to save Christmas, PM tells over-40s) According to a newspaper headline last week, I bear quite a heavy responsibility regarding Christmas. As Christians, we know that Christmas doesn’t need to be saved by us:  w e are not responsible for doing that, over-40 or not.  Rather, Christmas is about a Saviour (am I the first to get Christmas into the blog this year?!). Perhaps, when we are bogged down with deadlines, and words that don’t come,  we can forget that the responsibility for them does not rest entirely with us. First and foremost, there is God. Always God. God who said, in Exodus 19:4: I carried you on eagles’ wings and brought you to myself. Then there are people God sends our way to help. I recently passed what I had expected to be quite a difficult weekend. It marked 21 years since I lost my hearing and somehow, despite me not being great with numbers, dates like that stick in my mind. However, this year was conspicuous for its lack of difficulty
16 comments
Read more 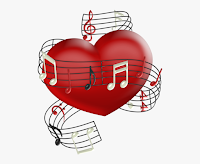 "Speak to one another in psalms, hymns, and spiritual songs, singing and making melody in your heart to the Lord."                                Eph.5:19     This Part 3 brings to an end the words that flowed from the subject "That Tune" set at our local ACW meeting.  However, with my blog contribution due on 21st December I think this could extend to the carols we sing at Christmas, as the words within can go from profound to meaningless! I left Part 2 thinking of the singers going into battle, and in these days how we need to plunder the enemies territory by expressing our praise and thanksgiving for who He is, and who we are in Him.   The Bible says “God inhabits the praises of His people” so if we do things in an attitude of praise it will carry His far-reaching anointing. In the last decade many songs have impacted me, but one stood out, “10,000 reasons to bless the Lord.”   It inspired me to write ten reasons a day to thank the Lord.  In orde
1 comment
Read more
More posts