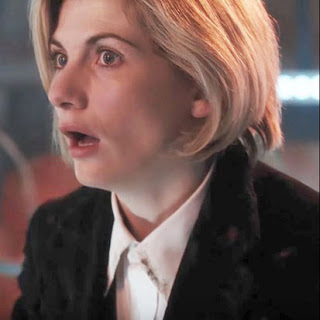 Unless you’ve been living under a stone – which is a perfectly acceptable lifestyle; don’t let me judge – then you will be aware that there is a new series of Doctor Who and the new Doctor is a woman.

There were dissenting voices when this was announced, far too many from the kind of fan to whom canon is sacred and must never, ever be tampered with – hence you can have a time machine disguised as a police box that can take you anywhere and -when, and a lead whose body can entirely regenerate, but they can only ever do it as a white man, with a 1 in 4 chance of being Scottish. Frankly, fans like that deserve the wake-up call. But I was caught out by a very good point from the undoubtedly feminist journalist Caitlin Moran, who has no problem at all per se with a woman getting the job … but, as she pointed out, the Doctor is almost always non-violent, and how many role models do boys have nowadays of an adult male who solves problems non-violently?

Which I have to admit is a fair point. We’ll have to see where it goes.

We always know that the Doctor will be on the side of the underdog; will give enemies the chance to be dealt with compassionately, only resorting to ruthlessness if they insist; will always be a bit of a stranger in a strange land, seeing things sideways to the regular humans. Each Doctor takes a while to settle in, finding new ways to let their character shine out through their persona.

So, I settled back to watch Jodie Whittaker’s debut with an open mind, and found myself enjoying it. And then I sat up abruptly because, halfway through the first episode, came a moment of pure poetry as the new Doctor describes the process of regeneration to a friendly human.


“There’s this moment when you’re sure you're about to die, and then you’re born. It’s terrifying. Right now I’m a stranger to myself. There’s echoes of who I was and a sort of call towards who I am.”

How is that not like being born again? The born again Christian is a new creation - yet also the same. But what will it be like? Who is the new you? Whatever was actively destructive to soul and/or body in your past has hopefully gone out with the old - it might even be why you’re now born again. But the rest? Your likes and dislikes? The way you react to certain situations?

You’ve surrendered all to God. Most of it, He will probably now give back to you, on new terms, remade along with the rest of you. But the question remains - who are you now?

It’s an exciting adventure - for you, and for the people who know you. But you’re in the hands of an infinitely better producer than Doctor Who will ever have.