By www.scskillman.com - August 04, 2018
Yes I do indeed find some lessons from Mamma Mia on the dynamics of life - and the writing journey. 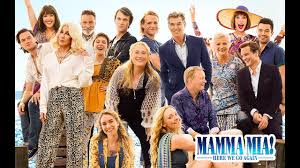 Having recently seen the film Mamma Mia: Here We Go Again, twice, and loved it even more the second time I saw it,  I felt compelled to draw out some dynamic equivalents for all of us.

Mamma Mia, the first movie, has been accused of being sentimental, idealistic,  sugary, unrealistic; and yet the second movie with its fast moving sequences of prequel and sequel I believe is very like life as we all can experience it... minus the extremely skilful singing and dancing sequences of course!

Of course all that I write from now on will only be fully understood by those who have seen and loved both movies. And if you haven't seen the second film yet and don't like spoilers... then don't read on!

Certainly I identified with young Donna to an extent; I myself travelled to Greece on an extremely eventful holiday with my friend during my first university vacation; and it was full of romantic interludes and risk-taking and narrow escapes. My first move after graduating from university was to go to the Greek island of Rhodes. And during that holiday I, like Donna, with Sam, enjoyed an island tour on the back of a motorbike, with a young Greek Adonis whom I had only met for the first time the hour before...

Here are the highlights in the second movie from which I drew my reflections:

1.  When young Donna and young Sam took a boat across to the small island, Donna spoke about knowing what she wanted to do for the rest of her life. She said she wanted to stay on the island forever. Sam said it wasn't that simple... and as we watched, we were fully aware of how their lives would pan out for the next twenty five years, as a consequence of their actions and decisions and words during the small amount of time they spent together.

2.  The relationship between Sophie and Sam twenty five years later, both grieving for Donna, but supporting and loving each other: so sad and yet so beautiful, and everything that Donna could have hoped for, notwithstanding that she could never have known her life would be cut short so early.

3.  The use of parallelism as the scenes switched back and forward over twenty five years; the rooms in the farmhouse; the two pregnancies; the two babies.

4. Amanda Seyfried, who played Sophie: older, sadder and wiser than the sparkly, impulsive, madcap young girl we see in the first film - and yet still so beautiful inside and out.

5.  The role that Donna's friends Tanya and Rosie play throughout both films; first, supporting and encouraging Donna, and then transferring that same support to Sophie.

6. Seeing the older men and their young selves dancing together at the end.

7. Cher in the role of formerly recalcitrant grandmother - now returned, reformed - to meet again the man she last saw in 1959.

Perhaps stretching credulity for some of us ... and yet still may there be a message for us there?

Life can be very strange indeed. It was Adrian Plass who said, You don't know what is going on behind the scenes.

Life may have brought us many disappointments; it may be difficult to keep faith, and easy to give up hope in achieving all that we have dreamed of: and I don't deny that. I am very well aware of it myself, in my life, in the wrong choices I've made, and especially in my writing journey;  and yet we can never discount life's quirkiness, its unexpectedness, the twists and loops and connections that may utterly surprise us.

It does seem to be an essential part of the dynamics of life that what we hope for and dream of may be taken out of our hands, and yet at some future stage we may receive an unexpected gift, that would never have been possible without our hasty actions or impulsive decisions in the past; sometimes we may do something outrageous or foolish; all this may play its part in some unfathomable outcome years ahead.

Perhaps the message is to accept the passing of time, accept the choices we have made in the past, trust in the processes of life, and keep faith.