Is it about space? By Ben Jeapes 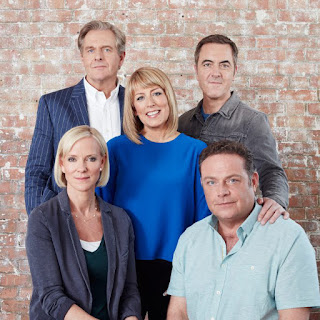 Hands up who watches Cold Feet?

For the uninitiated, this is a comedy/drama TV series following the lives of five 50-somethings in Manchester. The series initially ran back in the 90s-00s when they were all 30-somethings, then it came back after a 13-year hiatus with everyone having aged – but not necessarily grown up – in real time.

Two of the characters are Jenny and Karen. Jenny recently survived breast cancer, which has left emotional scars that are still healing. Karen runs a publishing company from home. Karen’s company is phenomenally successful, defying all conventional wisdom. It publishes approximately one literary title a year and yet still finances a lifestyle in which she lives in a 4-bedroom house, drives a nice car, eats out as often as she likes, supports a family … Of course, prices are cheaper in Manchester.

And it’s just possible the series editor doesn’t really know much about publishing.

Recently, Jenny tentatively suggested that maybe Karen could publish a book about her battle with cancer? Karen kindly but firmly put her down, with an answer that essentially said, “it’s been done, and by celebrities.”

Karen’s answer may be firmly rooted in sound marketing sense (and, to be honest, is probably the reply you would get from a large commercial publisher where marketing rules supreme: but as I’ve said, Karen’s firm is a one-woman outfit and she is the marketing). But, coming from an editor, that answer is rubbish. No surviving cancer memoir is “about” surviving cancer. It’s about the people who survive it. A good writer could make Jenny interesting enough that people would want to read about her. Isn’t that the premise of the whole Cold Feet series, after all? Do you want to watch a series “about” a group of middle class 50-something Mancunians? Probably not. Do you want to watch a well-written, funny, engaging show that follows a group of complex, lovable, annoying, flawed and ultimately redemptive characters who happen to be a group of middle class 50-something Mancunians? Now you’re talking.

I get this as a science fiction writer: people feel they have to say something so they say, “is it about space?” Well, perhaps, in the same way that Jeffrey Archer writes about Earth. It’s about the people first. If the people aren’t interesting, why should anyone read it? If the story doesn’t tell the most transformative thing that has happened to them in their lives up to that point, what is the point of it in the first place?

This may be why, ahem, so much Christian fiction has a bad rep – because it’s “about” Christianity. Then and only then do we get the characters as a way of outlining the subject.

Start with the characters. Make them interesting. The rest will follow.

Ben Jeapes took up writing in the mistaken belief that it would be easier than a real job (it isn’t). Hence, as well as being the author of 5 novels and co-author of many more, he has also been a journal editor, book publisher, and technical writer. www.benjeapes.com
characters Cold Feet Mancunians Writing