The Sheep Grazing, Unconscious of Paradise by SC Skillman 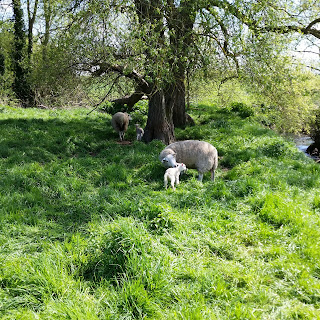 Recently whilst on retreat at the House of Bread, Shipston-on-Stour, I found several sheep and new born lambs in the field behind the retreat house. I became caught up in taking lots of photos of them, but not straying too near. The sheep in this photo was keeping an eye on me in case I posed a threat to her lamb.

Since I took the photo during the early morning, the light had that special freshness and clarity. The sheep grazed in a succulent meadow beside a tumbling stream.  The retreat was about The Road to Emmaus, and about "having one's eyes opened." One of the loveliest aspects of the whole weekend along with the content of the retreat itself was the frequent news that "another lamb has been born!"

As I looked at the mothers and their new babies the words of William Blake's poem "The Lamb" sprung into my mind. I couldn't help thinking "Little lamb, who made thee? Dost thou know who made thee? Gave thee life and bade thee feed by the stream and o'er the mead? Gave thee clothing, woolly, bright, and a voice of soft delight?"

I posted some of my photos on Facebook along with the poem, which aroused an enthusiastic response. One person apologised for spoiling the mood and said that when she sees little lambs it makes her feel sad to know they'll soon be shuttled off to the abbatoir; she noted that she's vegetarian.

As it happens, so am I. But her comment made me realise something about this whole experience, which I feel transcended any socio-economic issues about the livestock industry.

I realised that I had responded so strongly to the moment because it was luminous. Regardless of the fact that sheep are raised and lambs born for a commercial food market, the moment held a quality and a meaning far beyond that. 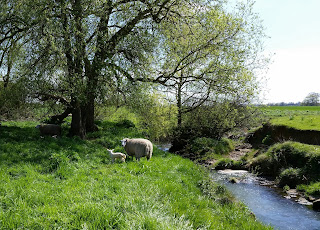 I recognised that this was the exact setting in which the mystic and visionary William Blake conceived his poem "The Lamb". And so was it the same setting and circumstance which would have inspired the Psalmist when he came up with the words of "The Lord is my Shepherd".

There was a perfection, a beauty and  radiance about this scene that transcended everything on an earthly plane.

This scene was about an archetypal innocence, joy and freshness; the sheep who has been in travail, now has her little one. Her life has been transformed: now she is a mother, and her desire to nurture and protect this little one has taken over her world.

Everything in this scene was present when the Psalmist wrote Psalm 23 and when William Blake wrote his children's poem. All that inspired those two great visionaries was here, higher truths embodied in the physical world, in that moment.