What we gonna do? by Joy Margetts

There is a scene from the original animated version of the film The Jungle Book, that is probably one of my favourite movie scenes of all time. And it lasts for less than a minute! Four vultures, supposedly drawn to represent the four members of The Beatles (they were actually asked to voice the vultures but declined), sit in a tree discussing what they are going to do. If you have no idea what I am talking about, you can watch the clip here 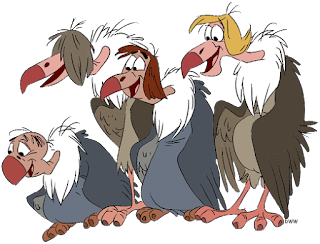 Flaps : I don't know, what you wanna do?

Flaps : Okay. What you wanna do?

Buzzie : Now you've got it. So what we gonna do?

Buzzie : So what we gonna do?

The reason I love the scene so much is that in my family it was often quoted and misquoted. We are all known for being hopeless at making decisions! Especially when away on holiday together…

The truth is that there are very many times, as writers, that we actually feel like we have no idea what we are doing, why we are doing it, what we are actually meant to be doing, and if we really want to do it! Whether it be staring at a blank computer screen with cramped fingers poised over a keyboard, navigating the minefield that is publishing, or tackling the monster that is marketing. There are many times when we can say, often to nobody in particular, ‘what am I going to do?’ And many times, when we actually have no answer to that question.

Late last year I had the idea of possibly running a Writers Retreat* this coming summer. I say I had the idea, but actually it was more like God kept nudging me, and I kept resisting. Then I spoke with two lovely writer friends, Joy Vee, and Joanna Watson. Both began to  see my vision, and very bravely agreed to come and be a part of the retreat. Trouble is, none of us had run a Writers Retreat before. None of us had even been to a Writers Retreat. We had no clue. Now I am not saying that we resembled the aforementioned vultures in any way. But that feeling of really not knowing what we were doing, what we needed to do, what we wanted to do, that was real! ‘What we gonna do?!’ was the panicked cry!

So we prayed! Separately and together, until the vision started to come together. The venue was booked, the catering organised, the programme pencilled in, costs calculated, advertising started. We still don’t know if enough people are going to come, what exactly will transpire when they do, and if it will be a success in inspiring people. But the good thing is that God knows! We have given it over to Him, and we are going to do our best to let the Holy Spirit lead it all. And we are going to keep praying.

Because wherever we are in our writing journeys wouldn’t it be good if the question we asked more and more wasn’t ‘What we gonna do?’ so much as ‘God, what are You going to do?’. Or ‘Can I be a part of what you are going to do, God?’.  Ask Him, ‘What do You want me to do, God?’ rather than ‘What do I want to do?’ It's a good reminder to us all.

If you want to know more about our Retreat,  there is more information here

I know that ACW members Jane Walters, and Katherine Blessan are also running Writing retreats. Andrew Chamberlain and Ruth Leigh are hosting their Christian Writer’s conference in September. And I am sure there are many such events out there. But if you do want more information, please do contact me, Joy Margetts, Joy Vee, or Joanna Watson.)