What can possibly go wrong?, by Ben Jeapes 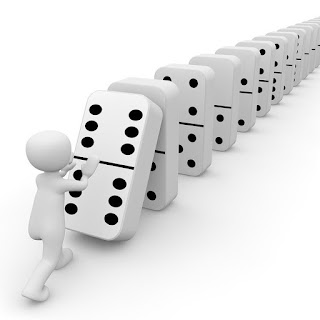 It was a lovely idea: the National Trust opening up all its parks for free to give people access to the great outdoors in this difficult time. English Heritage followed suit very soon after. Then just a few days later they were shut again. In between came a glorious weekend, the first properly Spring-like one of 2020, and so many people were taking up the offer that social distancing became impossible.

Then came the formal instruction for everyone to stay at home, so they would have had to close anyway - but the reason they had to close first of all was because of the unintended consequences.

You can laugh wryly at this one. Other aren't so funny. Domestic abuse calls up 25% since lockdown, charity says.

Everything has consequences, of course, and they are often unexpected. Unintended consequences are when an action has a knock-on effect that is completely counter-productive to the original intention. In Robert Graves’s Claudius the God, one of Claudius’s personal triumphs as Emperor is that he secures Rome’s port of Ostia by building an enormous breakwater across the entrance to the harbour. It is an engineering marvel and a highlight of his reign. In Robert Graves’s Count Belisarius, set a few centuries later, there is a throwaway remark that Ostia is completely silted up because some idiot went and built a breakwater across it, blocking the natural flow of the Tiber.

For a more comedic take, think of most of Bertie Wooster’s escapades: Jeeves would be out of a job but for the unintended consequences of Bertie’s plans.

We like our plots to be well worked out and watertight, and so they should be. Unfortunately we tend to make them so watertight there is no room for leakage. To be lifelike, we need to plot in at least a couple of unintended consequences to make the story more interesting. I own up to being very bad at this: how can I plot out something unexpected without it therefore becoming expected and hence predictable? One way round that is to show your work to a few trusted friends who can maybe spot these things for you. Or maybe you can take a real-world unintended consequence and change the names. Or just think it through.

In short, ask yourself what can possibly go wrong – and then make sure that it does.

Ben Jeapes took up writing in the mistaken belief that it would be easier than a real job (it isn’t). Hence, as well as being the author of 5 novels and co-author of many more, he has also been a journal editor, book publisher, and technical writer. www.benjeapes.com
unintended consequences Writing