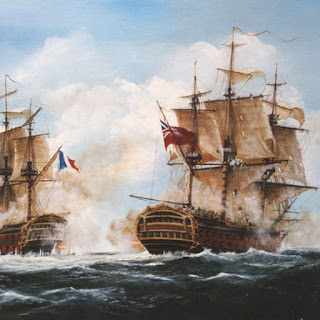 For the last few months my main project has been a fascinating family history. Sadly, not my own. The client has five admirals in his ancestry spread across three generations in the eighteenth and nineteenth centuries, all with glowing careers; Patrick O’Brian and C.S. Forester shamelessly nicked some of their exploits for their own fictitious heroes. The client hired a historian to research the sheer facts, of which there are many, and my task is to turn it into a manuscript.

The admirals were father, son and three grandsons. Two of the grandsons were brothers and the third was a cousin. My client is descended from the younger brother.

But the cousin is my favourite. I always favour the underdog. The three grandsons began their careers at exactly the same time, aged between 7 and 12, taken on board together by their father/uncle when he moved to a new ship. So, they all had a pretty level start in life. After that, as they grew older and apart, their careers began to diverge. They all rose through the ranks, but the cousin rose much more slowly. Commands seemed to fall into the brothers’ laps from an early age but the cousin, just as capable as the other two, was a much later developer. They were all grandsons of an admiral, but the brothers were also sons of a famous captain while the cousin was the son of a barrister. The older brother was captain of a warship when he was still a teenager (which was not actually unusual in the Napoleonic era Navy) while the cousin, only a year younger, was still a midshipman, not even a proper officer.

Eventually, to avoid unemployment on half pay, the cousin volunteered for an expedition to Cape Town – and that was when his luck changed. One thing led to another in the Indian Ocean; he commanded the expeditions in 1810 to capture the islands of Mauritius and Réunion off the French, and he returned to Britain a war hero.

All because of that one, desperate decision made by a thwarted, ambitious, impoverished young man.

These are the kinds of turning points that make lives, and we never know it at the time. Sometimes we might have an inkling that things are going to change – I had my suspicions along those lines when I went freelance – but how could I have known, for instance, that a particular decision on another particular day would lead to me meeting my wife?

So, writers: when your characters look back on their lives, what turning points do they see?

Ben Jeapes took up writing in the mistaken belief that it would be easier than a real job (it isn’t). Hence, as well as being the author of 5 novels and co-author of many more, he has also been a journal editor, book publisher, and technical writer. www.benjeapes.com
'writing'