Silence and prayer, by Eve Lockett 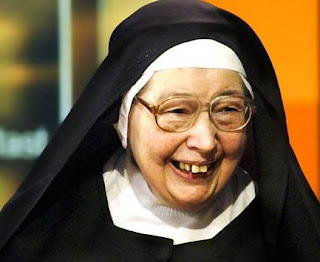 Sister Wendy Beckett, the ‘art nun’, was born in South Africa in 1930 and died on Boxing Day. She lived as a hermit, attached to a Carmelite Monastery in Norfolk, and wrote around thirty books. In the 1990s Sister Wendy quickly became famous through a series of TV programmes on art. Her audience made up 25 percent of TV viewers.
Sister Wendy’s character was a significant part of her story. The Arena programme about her portrayed someone who found human company difficult. Under the tutelage of JRR Tolkien, she was awarded a congratulatory first at Oxford, which means the examiners chose only to applaud, not to critique her work. Twenty years later, a series of breakdowns in her health ended her teaching career, and she was allowed to become a hermit which was the desire of her heart.
Today it is hoped we have a deeper understanding of those who find relationships and empathy difficult. Instead, Sister Wendy spoke of herself as having a ‘cold heart’, and as a child had no idea how to behave socially with friends. She had to find her own path to serving God and being herself. She chose a life of prayer, rising at midnight and praying through the night in the seclusion of her caravan and attending convent chapel services every day, tucked away in the belfry away from the other sisters.
When she was before the camera, she was in a sense still in solitude and still at prayer. She would speak only after a period of contemplation, never use notes or an autocue, and her words were so simple and direct that the meaning was never lost. She was known as ‘one-take Beckett’ because she was always word perfect.
Sister Wendy’s writing style was similar, in that she would contemplate and then dictate her words to her priest, who helped her in her projects. He said that there was seldom need for editing or revising her words. Of course this is unusual, and not to be recommended as a way of writing: it is idiosyncratic, and perhaps even formulaic.  But Sister Wendy did not pretend to be able to be anyone but herself. And as herself she was hugely influential.
We, too, need to be ourselves, but we also need to learn from each other. And what I pick up from Sister Wendy is this intriguing connection between silence and prayer and our speaking and writing. Do we despair of getting words out, or getting into the flow? What if we followed Sister Wendy’s example, and began with quiet contemplation, preparing ourselves along with our thoughts and words? I know I have written before about the connection between silence and writing, so I will admit it is something that touches me. And I’m re-using a quote by Henri Nouwen from The Way of the Heart:
Words can only create communion and thus new life when they embody the silence from which they emerge.
Sister Wendy’s life is an encouragement that each of us, however we are situated, whatever our personality, can bring glory to God, and the light of Christ can shine through us into the world.