My First NaNoWriMo - by Eileen Padmore 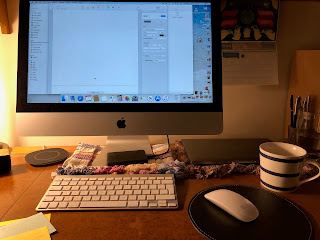 October was frantic but I managed a quick first look at NaNo on the 30th.  Help!  So many writers way ahead in the preparation stakes: planning, scheming, writing out neat chapter structure cards.  I was coming at it with a blank computer screen (and head).  Best jump in for a dummy run now then do it properly next year.  No pressure, no word targets I decided.

Title?  Nothing!  An empty mind to match the virgin page – signed into with a pseudonym so nobody could witness me making a fool of myself.  I chose the title of a recent blog that had been popular, then hit genre – difficult when you
don’t know what to write about.  Exploring ‘chat rooms’ and ‘genre lounges’ opened up options.  Would it be ‘Fantasy’, ‘Literary’ or  Satire, Humour and Parody?’  Humour always seems to find a way into whatever I write, but I opted for fantasy. It offered more scope.


Badges next: one for posting in a forum, another for donating – which placed a satisfying halo around my intentionally out of focus profile picture.  These offered quick fixes, encouraging me into the ‘fantasy lounge’. 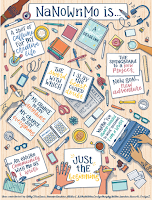 Fascinating but scary.  I seemed to be the only person who wasn’t sure I should be there.  Page upon page of clever discussion shouted at me, dark and esoteric:  ‘It sounds like your earth magic controls uniquely terrestrial aspects like biological and geological aspects', then reference to ‘space-being conduits’, and, ‘book smart and street smart’.  Could this possibly be the right genre for me? Should I have done a course first?  Too late!

ACW members discovered me drowning, buddied up, and I was off in good company, committed to writing at least 1667 words a day.  It was coming – I was keeping up!  Never mind the brick wall on day three, next morning it was back on with ideas that came too fast for fingers. Early on, the genre morphed into christian fantasy as my faith refused to stay quiet. 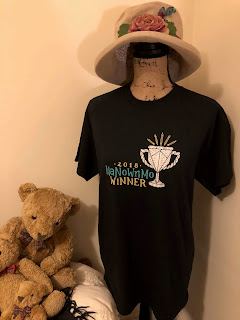 Writing to a pre-ordained word count was a new discipline.  By day ten my, ‘but I don’t do fiction’ mantra was in the bin.  I was doing it.  It might never be read or published but I was hooked and having fun!  The early cardboard characters started coming to life on their own.  One developed a marriage breakdown, another a disability.  This wasn’t fantasy world of course, but my animals were providing plenty of that.  Now what name did I give Fox in chapter three and had I just transgendered the cat?  More to the point, back in the real world, had I really almost gone through those traffic lights on red?

Family tragedy hit on day twenty when my nonagenarian mother fractured her pelvis and was admitted.  This removed peace of mind and sleep in one go.  The discipline of writing helped, as did my siblings.  Quality suffered.  There was no longer time for basic editing.

But I arrived – ahead of time, bagging certificate and T shirt.  NaNo2018 winner!  Feels good.

Eileen Padmore has retired from a life spent in health care and academia, having worked in Sierra Leone, Zambia, Eire and Northern Ireland (in the troubles) as well as inner city Birmingham and Leeds.  She has had articles published in Woman Alive, Christian Writer and contributed to the popular ACW Lent Book.  Married to a professional musician, the family includes a feisty springer spaniel and a large African tortoise.