The Seven Ages of Writing, by Georgie Tennant


Last month, we went on our church’s annual weekend away.  This involves leaving all home comforts behind and pitching a wide variety of temporary accommodation in the middle of a field, an hour from home, eating bacon sandwiches in your pyjamas with those who wouldn’t usually see you so attired and generally embracing the great (freezing) English outdoors. 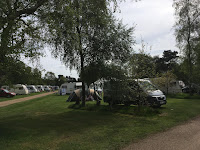 Towards the end of the weekend, I was busying myself, packing things away in the caravan, feeling content as I listened to my boys riding their bikes, laughing.  Being someone of nostalgic inclination, it wasn’t long before my mind meandered down memory lane.  A couple of memories sprung to mind: the first was trailer-tent camping, where our then-15-month-old-only-child was zipped into his compartment each bedtime, where we left him to bounce off the soft and padded walls (literally) until he was exhausted enough to lie down and sleep.  Very funny to listen to.  The second was at one of the summer Bible weeks (Grapevine as it used to be called, One Event now).  Still too young to attend a children’s group on his own, my energetic toddler beetled around under our feet as we attempted to load our worldly goods into the car to travel home.  Feeling envious of those who could perform this feat sans offspring, I looked up to see him, plastic bin on his head, careering straight into a swing-ball pole.  He ricocheted off it and laughed.

These things were stressful at the time and hard work – but now I can look back and smile.  I have always detested the posts on social media that tell me to savour every second, because it will soon be gone – usually written by someone for whom the day to day intensity of motherhood had long faded.  Quite frankly, there were some parts of it that I wanted to soon be gone.  But, with primary school-aged children now, growing in independence, I am beginning to understand their sentiment.  Before long, my just-turned-ten-year-old son will be a teen and his seven-year-old brother will be catching him up.  I try to breathe in and store it all in my soul just a little more than I did before.  (That’s not to say I don’t get stressed by “I need to build a model of an active volcano by tomorrow,” announcements or “he whacked me over the head with the space-hopper on the trampoline,” complaints – sentences I could never have predicted I would have to hear or deal with, when I first held my new born babies in my arms).

It got me thinking about life stages in our writing.  Shakespeare breaks life down into seven ‘ages’ in a well-known speech from the play, ‘As You Like It’ – the infant, the school boy, the lover, the soldier, the justice, the ‘lean and slippered pantaloon’ and the second childhood. (You can read it here, if you feel so inclined). Could we categorise our writing in a similar way?  Perhaps your writing is yet the infant (I think mine is somewhere around there!) – you’re beginning to write, the germ of an idea is there, you introduce yourself as ‘not really a writer compared to everyone else,’ at your local group, but the passion is there, the seed germinating.  Perhaps it’s the school boy – growing in confidence, sometimes fearless, sometimes retreating in terror, finding new levels, growing in skill, every day an opportunity to learn.

The lover comes next – you might be him (or her) if your writing is growing and developing – you’re finding your voice, honing your skills, growing in knowledge, preparing for lift off, out in the big wide world. Then the soldier – at this stage, perhaps, your work has left home, making its way to places you never dreamt it would see and you are excited for it, wondering how it’s doing, whether it will spread its wings and fly.  If you have passed all these stages, perhaps your work is the justice, as you enter the twilight years, wise and well-seasoned.  There is less intensity, less drama and what you do, say and write inspires the next generation of infants and schoolboys and soldiers.

I won’t try to drag the analogy as far as the ‘lean and slippered pantaloon’ or the ‘second childhood’ – I’m assuming if you’re reading this blog, you haven’t reached that stage yet, in your life or your writing!  But the fact is, wherever we are now, we’ll all be there eventually.  One day, you’ll look back on the phase you’re in now as a happy memory, viewed down the avenue of years and through the mists of time. So, for now, whatever stage of writing you’re at, savour it, make the most of it, even enjoy it, amid the sweat and tears of the daily grind.  Let’s embrace the stage we’re at and be thankful for every second we get to use the gifts God has given us, knowing that He delights in them too, more than we could ever know.

Georgina Tennant is a secondary school English teacher in a Norfolk Comprehensive.  She is married, with two sons, aged 9 and 7 who keep her exceptionally busy. She feels intimidated by having to provide an author-biography, when her writing only extends, currently, to attempting to blog, writing the ‘Thought for the Week’ for the local paper occasionally, and having a poem published in a book from a National Poetry Competition. She feels a bit more like a real author now the ACW Lent Book is out and she has a piece in it! Her musings about life can be found on her blog: www.somepoemsbygeorgie.blogspot.co.uk
#ACW #amwriting