By Susan Sanderson - March 30, 2017
In the autumn of 2016 the Association of Christian Writers (ACW) ran a competition for up to 1000 words on the subject of a Good Samaritan. The winning story was published in the Winter 2016 edition of Christian Writer, the magazine of ACW, which members receive through the post. The judges' comments on the top three stories appeared alongside the winning entry. Carol Purves’ entry came second. As Mealbank is a little long for a blog post, it is appearing here in two instalments. 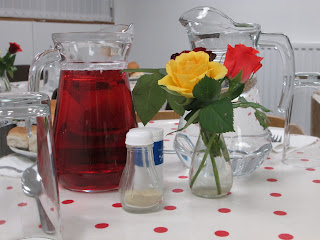 It started with a flood. A real flood, not a trickle of water. A flood that in places reached 16ft and made over 800 homes uninhabitable. The December 2015 floods, caused by Hurricane Desmond, were widely reported, but what is not always realised is the devastation to each and every family involved.

The catastrophic deluge of rain occurred on the Saturday night. On the Sunday morning members of our church in set to work to help. The formal church services became unimportant as the ladies as well as the men gathered together basic food, hot drinks, blankets and anything they could lay their hands on which could be of help.

Although no church member was ever in danger they did suffer physically. A drinks station was set up even before the police had erected theirs, meaning that some of the police were able to receive drinks from church members. The helpers waded into the water to help, often ankle deep and in a few cases knee deep. Those who had found time to don wellies and jeans were better off than those who were still dressed for Sunday!

The day was long and cold, the recipients frightened and homeless. People cried as they were handed drinks and hot sandwiches. Comments were made: ‘This is a piece of heaven in a hell.’
‘I’ve never drunk such a welcome drink in all my life.’

Often it was just a friendly face that was needed. The homeless cried and the helpers cried with them. They found it difficult to realise everything was given to them as a gift. A gift and nothing to pay.

Back at church a free cafe was set up and many came in out of the cold for warmth and refreshment. This help continued for a number of weeks until the worst of the devastation was dealt with.

There had already been a weekly free meal, known as Mealbank, given to women in a local hostel, but this work was increased and continued. Regulars still come in each week, not just the flooded, also the homeless, the hostel women, the lonely and the vulnerable. A monthly cooking class was given at the hostel and contacts made which are proving to be long lasting. 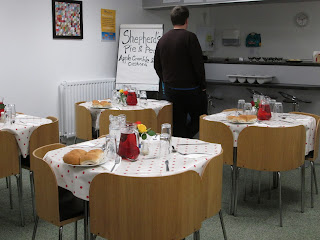 One of the many places flooded was the men’s hostel. 200 days later this has not yet been rebuilt. Many men are sleeping in shop doorways, on the cathedral steps and under covered areas of supermarkets. All are welcome to the Mealbank. Mostly all they need is a listening ear. This is given to them.


No professional help is available but people are directed to the right authorities. There they receive any kind of help they most need.

She has written a number of biographies:

Gladys Aylward, A Life for China, From Prussia with Love (the life of George Muller), Travel with Frances Ridley Havergal (the hymnwriter) and Jute to Jungle (the life of Mary Slessor).