Who's in charge here? by Sue Russell

By Aggie C - February 20, 2018
Recently I gave a talk about my writing to a small group of British Christians in France - nothing very high-powered, and they were all very kind and attentive. Some of them even bought books! One person asked me whether I had a favourite among my titles, and this was something I didn't  remember having been asked before, and hadn't really thought about; but when  I did, I realised that my first three books - a trilogy, so arguably one story - were particularly close to my heart, despite being replete with the flaws that often bedevil one's first efforts. With the wisdom of hindsight I could see that in this story I was teaching myself something through the experiences of the protagonist - something I needed to learn: in short, to depend on God and not on myself. 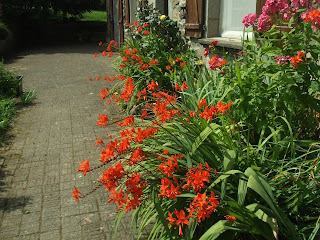 Obviously if I were to be asked, then or now,'Who is wiser, you or God?' I would answer, 'God, of course.' Anything else would clearly be insane. In my case self-reliance was (and maybe to some extent still is) an unthinking, almost automatic default. That long story in three parts was (among other things) a working-out of my need to learn a lesson that more sensible souls have learned long ago. In the past my modus operandi would have been to come up with a great idea (so I thought), run it past a few people (maybe) and then forge ahead. I'd get it done, dust off my hands, and move on to the next thing. Perfect, I thought. No chance of  boredom.But perhaps other things too were teaching me that not everything is susceptible to such a model - parenthood, for instance.
I try these days to lay projects before God, to pray for guidance before I begin rather than as a guilty afterthought. But it doesn't always happen. We are all, I suppose, for ever falling down, and it's usually the same old things that trip us up. I was thinking these thoughts, with a view to this blog, and then today I heard two very different sermons about giving something up for Lent - specifically, giving up control. It was peculiarly apposite. The second of these sermons was hard-hitting, making the small sacrifice of a six-week chocolate or alcohol fast seem quite paltry compared to the huge sacrifice that Jesus made for us.
After those first three books, I experienced a lengthy period of having absolutely no idea where to go next. Eventually a germ of a clue materialised and grew and became a novel, but this happened every time. My creative brain was blank; nothing chimed. So there came a point when I asked God to supply me with an idea I could get behind if he wanted me to continue writing in his name and for his honour. If no such inspiration arrived I would conclude that he wanted me to do something else, and I hoped that I would obey, even if it hurt. So far he has answered that prayer four times, even though I had to wait for some while in the corridor before a door opened.
Perhaps this is something that happens as we get older, with the unavoidable knowledge of loss of strength and sometimes loss of confidence, the knowledge of the brevity and fragility of life. But perhaps I am finally learning to lean on God and not on  my own understanding.
What is your default? I suspect many of us have one and that it's an ongoing struggle.
(I have decided not to give something up for Lent; instead, as in other years, I am taking up something extra, this year being the recent ACW  Lent anthology. Since I like reading, this might be regarded as not much of a sacrifice!)


My latest novel is A Vision of Locusts, published by Instant Apostle. You can find me on my website www.slrussell.net or my blog www.suerussellsblog.blogspot.co.uk