The Florence Delusion by Janey Clamp

By Jane Walters - June 05, 2016
At the outset I must issue a SPOILER ALERT! I have written this blog in response to seeing the film Florence Foster Jenkins, so if you haven't seen it yet - and if not, why on earth not? - then you may want to bookmark my musings and return to them once your viewing duty is done.

I feel I kind of grew up with Florence. Many people I know seem not to have heard of her, whereas I had both heard and heard about her. In our house the radio was always on and at Christmas in particular the record player would be dusted off and the vinyl LPs would form the soundtrack to our celebrations. My mother always loved the old tunes and the old singers, and Florence was known to us along with Perry, Bing and other more sensibly named crooners,

The marvel of the woman is this: music was her life, her passion, the force within her soul that served her existence as essentially as the blood that flowed in her veins. She chose to express that passion through singing once she was no longer able to play the piano. She sang: boy, did she sing! The most tuneless approximation to the art one could imagine.

A key moment in her career came in October 1944 when she decided to hold a concert in Carnegie Hall in front of 3000 people, 1000 of which were servicemen whom she admitted for free. Now it is one thing to have a private dream, a hidden ambition, a secret longing; but quite another to go public with it, and in front of such a large audience. But such was her self-belief and the support of her loved ones that she went ahead, resulting in some public ridicule and a scathing review in the New York Times.

At that point - what took her so long? - the questions began. Am I deluded? Have I been just kidding myself?

Have you ever asked a question like that yourself regarding your writing? I guess it's one that nags at the heart of all creative people. Writing is our passion. It drives us like an ever-revving internal motor. It pushes us where we wouldn't normally venture, into exposed places where our innermost thoughts and expressions are laid bare; always accompanied by the possibility of misunderstanding if not ridicule. What if, after all, we're no good?

So I ask, was Florence wrong to be deluded about her talent? Did her friends and family do her a dis-service by encouraging her? Was there an alternative? Well, without singing, her own life would have no doubt been shorter, smaller, limited and repressed. Is that what we're after? Perhaps in that is the only answer we need. 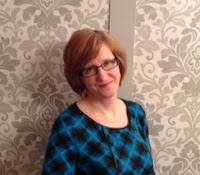 Janey Clamp is Creative Writer in Residence on the Sunday Breakfast Show on BBC Radio Norfolk and on the Thought of the Day team at Premier Radio. She is currently editing her first novel and runs the ACW small group Brecks, Fens and Pens.
.
#delusion #FlorenceFosterJenkins #singing #writing