What a dreadful title for a writers’ blog! But wait - I’m only trying to release space for more books. As you know, a writer needs to read to improve their writing skill, so week-by-week I accumulate more and more reading matter.  I have a massive bookshelf in my kitchen which is double stacked. Every other room except the bathrooms have equally crowded bookshelves. It’s not a problem until I read something on my ever-growing to-be-read pile but have nowhere to put it. 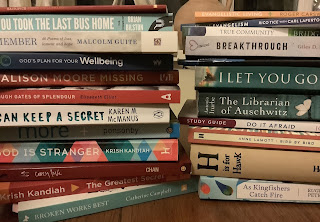 Ok - I could buy more bookshelves but there are two problems there. The first is the lack of available wall space and the second is the knowledge that this large rambling ever-needy house is increasingly becoming too much for us. At some stage we’ve got to sort out our possessions and, with piles of books growing, it is time to begin.

I tried the other day. After many hours I’d found four to take to a charity shop, then realised I hadn’t read two of them. Is it permitted for a writer to throw away a book before he/she has read it? One I definitely wanted to read so it went on the to-be-read pile, which toppled to one side. I now have two such piles. On the table in the dining room (don’t worry, we have a huge table to eat from in the kitchen) the to-be-read or TOBERE piles sit alongside the I-should-have-made-notes-so-I’ll- go-through-it-again pile, ISHHAMANO; my started-or-nearly-finished pile, STORNF; my give-away-pile, GAPI; and my awaiting-reviews-pile, AWARE. Then I also have some books for reference, REFPI and to go on the coffee table when (if) I’ve returned the ones already there to the non-existent spaces in the bookshelves, COTA.

I’d like to pretend I have a system but alas, one book moves from one pile to the next, especially GAPI to TOBERE,  because I like to check that my gift will be acceptable. Or REFPI to TOBERE, or the obvious one, TOBERE to AWARE, and then I’ve forgotten which pile is which, so that’s confusing and I begin to read them again to establish their identity which takes time that could be used identifying some to throw away.

So what about that other book I hadn’t read which nearly went into another pile (CHASH)? Now this is a tricky one because it belongs to a friend who has asked me several times what I think of it. It’s by an extremely well-known author but I can’t get into it. I can’t really take that one to a charity shop.

Maybe I need a TRAG pile?

I reckon you can work out what that is (hint: follow the pattern used for COTA).

You may wonder how there were still two books to go. That was easy - I found I owned duplicate copies. 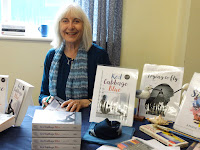