Fashion in print and language

By Susan Sanderson - March 31, 2020
Earlier this year the centenary of my father’s birth passed without comment (outside our family).

Dad worked in the printing industry. He was a (printer’s) compositor for most of his working life. He usually had inky fingers and occasionally a burn from hot lead. Compositors worked standing up. In the years approaching retirement he became a reader – a sedentary job. He had been a reader from the age of eight, but in printing ‘reader’ is short for proof-reader.

After he retired he offered me two reference books, which I accepted eagerly being an aspiring writer. Recently I consulted one of them to check the rules for punctuation in dialogue. What I found surprised me as it was the reverse of what I remembered from my school days.

At primary school we called quotation marks ‘speech marks’. The opening ones resembled the figure 66 and the closing ones 99. Inside speech marks any quotations (not ‘quotes’ in those days) were in single quotation marks. In the 38th edition (1978) of Hart’s Rules for Compositors and Readers at the Oxford University Press the reverse is the case.

With all the discussion about the film of Little Women, I began reading my childhood copy. Double speech marks abound. Other more recent books, such as The Shadow Doctor by Adrian Plass, the president of the Association of Christian Writers (ACW), have single quotes.

When email addresses and URL’s started to appear everywhere in print, Dad commented that he thought upper case letters, or capitals as we called them at school, would vanish. This prediction is unfulfilled.

I am fascinated by the derivation of words. Upper case comes from earlier days in printing, before computerisation. Compositors used to set type by picking out small pieces of lead and lining them up in a hand-held wooden frame, one line at a time. The capital letters were stored above the other letters, giving rise to the terms upper and lower case.

I suspect that every trade had its initiation ceremonies. The compositors’ nasty trick was to wait until an apprentice had almost completed a line before asking him (I chose the pronoun deliberately) the time. A right-handed apprentice would hold the frame in his left hand. Turning his wrist to look at his watch would cause his recent work to spill!

Dad worked through many technological changes as keyboards replaced the old linotype and similar machines, which in their turn had replaced hand-setting.

The way jobs changed in the 20th century was quite startling. Many women found it difficult to return to work having been left behind in a few years. As far as I am aware women were not employed in the printing industry. How much that has changed since laws were passed about equality in the workplace, I do not know. Anyone setting novels in that century may need to research the dates of various innovations. 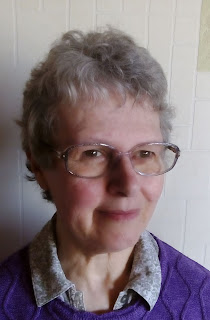 Susan always wanted to be a writer.  In 2012 she revived her interest in writing with a blogging project to collect the kinds of sayings, which were much used in her childhood.

Susan experiments with factual writing, fiction, humour and poetry.  She does not yet have a book to her name. Her interests include words, languages, music, knitting and crochet.  She has experience of the world of work, being a stay-at-home mum and an empty-nester.   She is active in her local community and Church, where she sings alto in the choir. She and her husband live in .
Follow her on Twitter @suesconsideredt
In April she will be Blogging from A to Z on Sue's Trifles