Suffering sorted - not, by Ben Jeapes 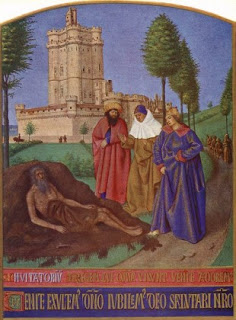 Q: What did Job have in his wardrobe?
A: Three woolly comforters.

There’s a video that keeps popping up on social media of Stephen Fry delivering his opinion of a God who could create a world in which there is bone cancer in children. I won’t put up a link because you can find it through Google with not a lot of effort.

Sadly the people who repost it are usually atheists under the impression that they’ve actually made some kind of point. What Fry doesn’t make clear is how he thinks there could not be bone cancer in children. Cancer of any kind is a malfunction of the natural cell division that we all need to keep on living. Sometimes it goes wrong. Fry’s outrage at innocent suffering is genuine and sincere, and I would say God-given. Sadly his argument isn’t. A God who (a) is so all powerful and transcendent that he could create a world without bone cancer in children simply doesn’t (b) owe Stephen Fry an explanation. This argument boils down to “God can’t exist because if he does then he doesn’t act like I think he should.”

(Not that it’s any of my business how Fry spends his money, but I am pleased to see he’s a supporter of several charities including Leukaemia and Lymphoma Research; blaming a God he doesn’t believe in for something he isn’t prepared to do anything about himself really would be a bit much.)

There, that was easy, wasn’t it? Suffering explained ...

Well, maybe not. An unexpected godfatherly duty I once had to undertake was to write to my godson explaining - or trying - why his father’s cancer wasn’t being healed. Two thousand years of theodicy, for a 12-year-old, summarised on two sides of A4. I came to the conclusion it’s no coincidence that ‘theodicy’ and ‘idiocy’ are such similar words.

One of my early motivations as a Christian writer - many years ago now, I'm pleased to say - was that I would one day be writing the definitive Christian works on ... well, anything and everything, really. Since then I’ve learnt to shut up on a lot of subjects and have become a much better writer, and (I humbly submit) Christian, as a result. On this particular subject I’m very happy to give the last word to another non-believer - the late Sir Terry Pratchett. His 2008 novel Nation manages to be a comedy despite being set on an island whose population is abruptly wiped out by a tsunami. It was written around the time Pratchett experienced his own personal tsunami: a diagnosis of Alzheimer’s disease. This book is Pratchett’s Book of Job - much easier to read, funnier, and coming to the same conclusion. Job, and Nation, show that you can scream WHY? at whoever you do or don't believe in, and either way you get the same answer: “Because. Who’s asking?”