What led you to writing? by Lucy Rycroft

By Lucy Rycroft - May 02, 2018
Perhaps the desire to write has been in you since you first picked up a pencil, and you're hard-pressed to recall a time when you weren't led to writing.

Or perhaps it was in a difficult season of life, when verbal expression did not come easily, that you discovered writing to be a much-needed avenue for emotional release.

For me, in a similar way to that in which my love of eating inspired my love of cooking, the thing which led me to writing was...a love of talking.

I've talked non-stop since I can remember. I've talked people to sleep, talked for a living, and yes, I've been that annoying person who dominates Bible studies with ramble and rant (hoping that my fairly-regular offering of chocolate brownies saves me from being kicked out).

In short, I love to talk. But I also love to listen. In social situations, I hate to be the first to leave in case I miss anything. I'm interested - obsessed, maybe - in other people's stories.

One of my fears as I approached parenthood back in 2009 is that my conversations would now revolve purely around child-related topics - weaning, potty-training, sleep - and that any vaguely intellectual topics of conversation would be banished to a 'pre-Mum' area of my life, along with a flat stomach and a social life.

To my utter relief, I found that whilst my friends and I did talk about these things (and very supportive that was too), we also discussed the deeper things of life - faith, politics, education - whatever took our fancy.

But just as we were giving our brains the exercise they needed in a life which was otherwise consumed by menial tasks, we would find our discussion on the place of hospitality in the early church cut short because a toy car had got stuck in the mouth of a hideous plastic dinosaur.

So I was led to writing. Blogging, to be specific. The aim was simple: to finish those conversations, say what I wanted to say, and wait to hear whether anyone would speak back through the blogosphere. The blog's tagline became 'Pursuing discipleship through the haze of early parenthood, and yes, people did start to speak back.

Perhaps a more pressing question for us as writers is, What keeps you writing? And I expect that a common answer will be something about connecting with an audience, however big or small: the sense that your voice is valued by someone else.

As I blogged, I discovered 'guilty-pleasure' readers coming out of the closet, sending messages like "I know I'm not your target audience but..." I thought I was writing to other mums, but soon found dads, non-parents, and grandparents resonating with the topics covered.

And this is what keeps me writing. Not a huge audience, but a few individuals who consistently encourage, saying "Yes! We want to hear more of your voice".

When you're led to writing, there's no knowing where it will end up. But aren't you grateful that you can submit it to the One who does have a purpose and a destination for it?

He is, after all, the Word - the ultimate, the first and final Word. And, in His kindness, He allows us to play with words too, even using them to build His kingdom, whether you have an audience of one, or one million. 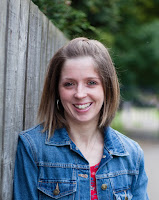 Lucy Rycroft lives in York with her vicar husband and their four crazy children. She blogs about faith, food, family life, adoption, and whatever else takes her fancy at Desertmum, and you can follow her on Twitter and Facebook, which is far less exhausting than getting stuck in a real-life conversation with her.