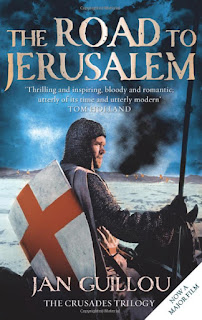 I enjoy good heroic fantasy, but then something comes along that gives me just the same sort of buzz – and it’s set in the real world.

Case in point: Swedish author Jan Guillou’s Templar Trilogy. His character of Arn Magnusson, despite being only 20 years old, has become a Swedish folk hero. Guillou cleverly takes Arn’s fictitious life and wraps it into real history and the birth of the kingdom of Sweden. For instance, with a bit of handwaving the fictitious Arn becomes the grandfather of the very real Birger Jarl.

In the first book, The Road to Jerusalem, Arn is born into minor Swedish nobility, and for various reasons spends most of his childhood being raised by monks, including an ex-Templar who teaches him various extracurricular non-monkly fighting skills. Here we encounter the strange paradox, carried through the series, of exemplary, godly, humble Christians who are nonetheless convinced it is the duty of every good Christian to go out to the Holy Land and slay the infidel.

It’s this tension in the Christian characters that makes me mention the series here. From our twenty-first century perspective, they have a massive flaw in their faith that they are quite simply blind to. It was shared sadly by far too many of our ancestors – but it makes them believable. What do we do ourselves, quite innocently, that will cause our descendants to look back with 20:20 hindsight and wonder what on earth we were thinking? What unrecognised sins will we blindly carry to our graves?

Anyway, this education comes in handy because at the end of the book Arn inadvertently sleeps (consecutively) with two sisters, one of whom is his true love and one of whom is a scheming minx. For this sin he must do 20 years penance as a crusader in the Holy Land.

This brings us to the second book, The Templar Knight, which switches between Arn’s story, the story of the Second Crusade, and Arn’s beloved Cecilia, doing her own 20 years penance in a convent back home. From her perspective we see the birth pangs of the new Swedish nation, while Arn’s purity of heart, nobility and Christian virtue earn him the respect of Christians and Muslims alike, and make him one of the few crusaders to make it out of the Holy Land alive after the disastrous Battle of Hattin.

Finally, in Birth of the Kingdom, Arn returns home determined to use his military skills and wealth to bring peace to his homeland, and forge it into a new nation.

If you read heroic fantasy for the world-building then medieval Sweden is described in enough detail to suit your every need. If you read it for the military clashing and banging then Arn has it in spades, and the version of Christianity practised by the Swedes – a mixture of literalism, ritual, pragmatism and Marian veneration, all with residual pagan overtones – presses all the right buttons for anyone expecting arcane religions and magic. It’s exactly the same as reading heroic fantasy, except that it isn’t and it’s a guilt-free trip.

Note: nothing herein in any way precludes me trying to write heroic fantasy if I ever decide that’s the direction my career should take.

Ben Jeapes took up writing in the mistaken belief that it would be easier than a real job (it isn’t). Hence, as well as being the author of 7 novels and co-author of many more, he has also been a journal editor, book publisher, and technical writer. www.benjeapes.com
crusades fantasy Writing