Warts and All, by Fiona Lloyd 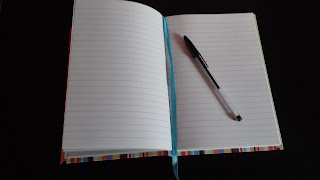 Anyone else recall the thrill of being given a new exercise book at school? All those neatly-lined pages - hopefully with margins already accurately marked - wrapped in a smooth, colourful cover. To me, they spoke of a fresh start, unencumbered by past mistakes aggressively circled in red pen. A new book bristled with possibilities, and I always felt slightly cheated at the beginning of the academic year if our teacher insisted we complete last year’s book before starting a different one.


And for the first couple of days, I’d do my best to keep my work fault-free, hoping that the red pen marks would come in the form of ticks rather than crosses. Sooner or later, though, my attempts at beautiful handwriting reverted to my usual spider-scrawl. Careless errors resulted in ugly crossings-out and pages plastered with Tippex, while covers became dog-eared through being pulled in and out of my bag. My perfectionist streak was – as usual – disappointed. 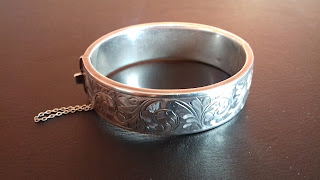 As I write this, I’m wearing a silver bangle that used to belong to my mother. It’s a precious link to my memories of her: I suspect she bought it before I was born, as I can’t remember her ever not having had it. From a distance, it looks like an elegant, polished piece of jewellery. However, closer inspection shows an obvious dent in the engraving, as well as minute scratches around the rim. It’s possible a skilled jeweller could do something about the marks, but I prefer to keep the flaws: for me, this is part of its charm. The fact that it’s damaged reminds me it has been worn, and connects it to a real person.

There’s a message here for our writing. If our characters are too perfect, they come across as unrealistic and probably a bit boring. But if we give our protagonists (and villains) a judicious sprinkling of faults as well as good qualities, they become people we want to engage with. Our readers are more likely to be drawn in to the story (even with non-fiction) when the people we write about are well-rounded.


Once, at a Bible study, we spent time talking about our favourite biblical characters. Almost without exception, the reason we gave for choosing a particular person was because we could identify with their failings. We tend to be inspired by those who are honest about their weaknesses, because their struggles lend hope to our own lives. Rather than falling into the trap of thinking we have to be perfect before we approach God, we need to remember that he accepts and delights in us, warts and all.

Fiona Lloyd works part-time as a music teacher, and serves on the worship leading team at her local church. Fiona self-published a violin tutor book in 2013 and blogs at www.fjlloyd.wordpress.com. You can find her on Twitter at @FionaJLloyd. Fiona is vice-chair of ACW and is married with three grown-up children.