Endings and beginnings by Sue Russell

By Aggie C - October 20, 2016
Over the past few years I seem to have acquired a small group of very elderly people with whom I try to keep in contact, either by phone or visit, from time to time. Two ladies were close friends of my mother's, 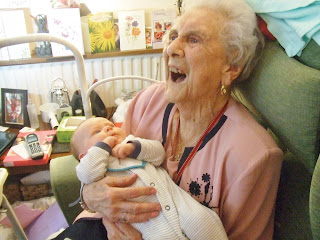 and I resolved when my mum died to keep in touch with them, however infrequently. This was more for my benefit than theirs, a way of keeping some kind of contact with my mother and her world. Ella, at just turned 90, is the youngest and fittest of the bunch, still living in her immaculate bungalow, mobile and reasonably healthy. Doris, on the other hand, is crippled with painful arthritis in knees and hips and has almost completely lost her sight. However, until very recently she was sharp and well-informed and full of good humour, and was one of the people for whom I regularly brought back wine from France! A favourite quote from Doris, who in better times loved to go out for lunch with friends: 'I don't mind, just as long as I can get out of the  car and into the pub!' In June she celebrated her 98th birthday with a tea party in her own home. She had obviously forgotten how many people she had invited, because she told me hardly anyone would be coming, and in fact her small house was jam-packed with friends and well-wishers. The picture is of Doris holding a neighbour's baby that afternoon, and laughing at some daft remark of mine. Some time after this she decided that life was getting too tough for independent living. She had carers who were also friends during the day, but the nights were difficult, and when she had a disastrous fall and ended up in hospital it made the point.She decided to go into a home, and that's where she is now. She has recently had another spell in hospital; heart failure was diagnosed. Her only surviving son now plans to move her to another home closer to where he lives, understandably. So soon I shall visit Doris perhaps for the last time. In the same care home is another lady who was a good friend of my mother's, Pat, someone I liked a lot - a generous, kind soul. To my shame I hadn't seen Pat for a number of years till I visited her at the same time as Doris. She was thin and shrunken and rather deaf, but perfectly compos mentis and recognised me immediately.

More recently I found out the whereabouts of a very elderly gentleman called Geoff with whom I was once a Samaritan. A mere lad at 94, he is in a home where the majority of the residents, sadly but it seems inevitably, have some form of dementia. Geoff decidedly has not, so life can be a bit lonely with a dearth of conversation, and he loves having visitors. It is noticeable that he can be sleepy and unfocused and a bit confused when I first arrive, but just having someone new to chat to brings him to life.He always thanks me for coming but I feel the pleasure is mostly mine. Chatting to Geoff, with his acute wit, interest in world events and cheeky humour, is no hardship at all. He too takes delivery of a few bottles of French wine when I see him and he shares them with the others at the dinner table.

Getting old, losing independence, becoming ill and frail, dealing with loneliness as friends die, and facing death oneself, is no picnic. But one thing above all, apart from the cheerfulness and courage of these ordinary but remarkable individuals, allows hope to triumph over what could so easily be a depressing situation. All these people are Christian disciples. Pat is the soul of kindness, a faithful friend. Doris is cheerful and forgiving in the face of current problems and past tragedies. Ella is loving and welcoming and full of fun. Geoff has a mission in the care home - his room is nicknamed The Chapel, and he recently held a simple Bible study for those who were interested. On his chest of drawers he has a photograph of his late wife as a young woman, and he trusts that they will meet again. Even at their great age, they have a present ministry and an eternal hope, and that makes all the difference.