Nuts and bolts by Sue Russell 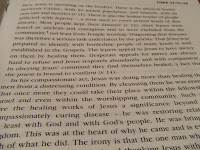 Among the writers' groups I belong to, I have a number of nicknames. 'Commander Comma' and 'The Nitpick Queen' are the politer ones. It's true: spelling, grammar and punctuation errors leap out at me from a text, waving 'Here I am!' banners. I also once had a long, heated (but not acrimonious) discussion with a group of friends on the use of the hyphen.

Spelling, grammar and punctuation are, of course, just conventions. Normally I am happy to flout convention, tradition, anything that restricts (within reason and mercy.) In other centuries capital letters abounded, punctuation marks were scattered liberally where today we would eschew them, spelling was often quite different and not necessarily consistent, and such things as paragraphs and indentations were barely thought of. So I admit that my piffling obsession isn't something of ultimate importance, and in a hundred years' time no doubt much will have changed. Happily I won't be around to bewail the demise of the colon, or the randomness of brackets, or whatever other horrors may have come along.

However, we are living and writing today, and I think it is important to adhere to the conventions of our own time when producing a written text, whether verse or biography, textbook or romance - not in a slavish way, but simply in the interests of our content. Typos creep in, as I know very well, especially now when so many of us write on keyboards which make it easy to flip back and forth, adding and erasing, so that you end up writing 'the ' twice or  fail to notice an inverted apostrophe (I shudder.) Nevertheless, a text with errors can make the reader think, at best, 'This author is careless,' worse, 'This author is ignorant,' or worse still, 'This story must be nonsense.' It may be a great book, but justice is not done to it if it is poorly edited.

The spell-checker, I reluctantly suppose, has some value. But it can't be relied on. It will merrily let you have 'taut' when you meant 'taught,' replace 'mayor' with 'mare' or 'rein' with 'reign.' And we all know the mayhem that missing or misplaced commas can cause. 'Mrs Figgis listed her hobbies as cooking her dog and her grandchildren.' A simple comma would have prevented the irate descent of cruelty-prevention agencies on a presumably innocent woman.

I  can't remember that I was taught punctuation in depth at school, though I'm sure errors would have merited a red pencil. No, it seems to me that the acquisition of knowledge, good habits, an instinct for what is right comes from reading a lot of other people's excellent, well-edited prose. It trains both ear and eye. However there are rules, and I came across a useful (and amusing) site which may interest some of you. Just type in 'Top Punctuation Howlers.'

Having posted on this theme, I must make very sure that there are no errors in what I have written.Those of you who are even more purist than I am may object to starting sentences with 'and' or 'but.'  But that's another story altogether!

Sue Russell writes as S.L.Russell and has five novels available in the usual places: Leviathan with a Fish-hook, The Monster Behemoth, and The Land of Nimrod (a trilogy) and two stand-alones, A Shed in a Cucumber Field and An Iron Yoke. They are published by New Generation and are all broadly in the same genre - realistic British Christian fiction for adults.

Sue lives in Kent with her husband, currently one daughter, and Rosie the dog. She is an amateur singer and a church organist, and blogs at www.suerussellsblog.blogspot.com