The Stalingrad Madonna, by Ben Jeapes 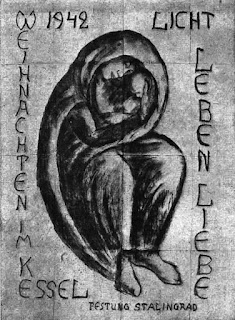 Winter 1942, and the Stalingrad siege was coming to its inevitable end. The German Sixth Army was cut off, encircled by the Russians. Hitler had long ago decided that he would sacrifice rather than rescue them. No help was coming. They were down to their final drops of fuel, their last scraps of food. Men were dying of starvation in the freezing cold.

And then came Christmas.


“From quite early in the month, men started to put aside tiny amounts of food, not in preparation for a breakout across the snow, but for a Christmas feast or gifts. A unit in 297th Infantry Division slaughtered a packhorse early so as to make horse sausage as Christmas presents. Advent crowns were fashioned from tawny steppe grass instead of evergreen, and little Christmas trees were carved out of wood in desperate attempts to make it ‘just like home’.”

“There can be little doubt about the genuine and spontaneous generosity of that Christmas. A lieutenant gave out the last of his cigarettes, writing paper and bread as presents for his men. ‘I myself had nothing,’ he wrote home, ‘and yet it was one of my most beautiful Christmases and I will never forget it.’ As well as giving their cigarette ration, men even gave their bread, which they sorely needed. Others laboriously carved equipment racks for each other.”

Husky strains of ‘Stille Nacht, heilige Nacht’ drifted out of the bunkers into the freezing air.

A doctor in the 16th Panzer Division, Kurt Reuber, was also a talented amateur artist. On the back of a large Russian map - the only paper available - he drew a Madonna and Child in charcoal. “... an embracing, protective, almost womb-like mother and child, joined with the words of St John the Evangelist: ‘Light, Life, Love’.” He pinned it up on the wall of his bunker.


“Everyone who entered, halted and stared. Many began to cry. To Reuber’s slight embarrassment - no artist could have been more modest about his own gifts - his bunker became something of a shrine.”

Reuber died two years later in a Soviet POW camp. His sketch, the Stalingrad Madonna, was sent home with a patient airlifted on the last flight out from Stalingrad. It now hangs in the Kaiser Wilhelm Memorial Church, Berlin, with copies in the cathedrals of Berlin, Coventry and Volgograd (Stalingrad as was).