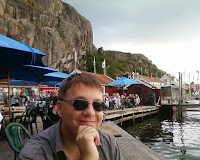 Ben, thank you for agreeing to be interviewed for the monthly showcase. It is a pleasure to adve you join us. I’m going to start with the quick fire round, so buckle up and off we go.

What’s your favourite food?
Something with pasta.

If you could have any car in the world what would it be?
Straker’s car from UFO. Google it if the reference is unfamiliar.

Have you met anyone famous? If so, in what context?
Richard Dawkins. I was working somewhere with a videoconferencing suite which he used to give a lecture to New Zealand from Oxfordshire, and as this was a newsworthy event and I was the newsletter editor, I was Dawkins-wrangler for the day.

If you could travel to just one country in the world, where would it be?
New Zealand.

Where is your favourite place to write?
Where I am now – my writing corner at home where everything is set up to my satisfaction and the room is full of light from its large south facing window.

Now for a few more in depth questions.

How did you get started writing?
I always have. I enjoyed it as a kid. Then I got into the short fiction collections of Arthur C. Clarke and Isaac Asimov, both of whom always loved to include little essays on the genesis and subsequent history of their stories – so I knew it could be done. What really set me off making a serious go at it was a story by Anthony Boucher called “The Quest for St Aquin”, which is set in a future where the church is outlawed and persecuted, and features an atheist robot which nonetheless uses Aquinan logic to deduce the existence of God. So I too wrote a story in which the church is outlawed and persecuted in the future … (I completely missed the philosophical point about Aquinan logic.)

In which genre do you write? Why this genre?
Science fiction and fantasy – see above. As a teen it was virtually all I read, and it was most of what I read until well into my thirties. Science fiction and fantasy fandom is an excellent place to learn your craft. Forget the rubbish you see on screen – on paper, it’s an extremely literary genre, very professional in its attitude, with a well-developed critical tradition. It’s also extremely democratic. Almost every big sf&f name has come up through the ranks, starting out as an awestruck fan. If you’re at a convention and you pass someone like George R.R. Martin in the corridor, you know that they’re there on their own ticket; they too have stood in line at registration and paid their fee; and they too were Once As You Are.

Have you got a favourite genre to read? If so why?
See above, and you might spot the theme developing … I have cut back on the sf&f, because there’s just so much of it now, and I knew I was doing myself no favours by not reading more widely.

How would you describe your writing regime?
Daily. My first novel, His Majesty’s Starship, only had a couple of thousand words to go … and it stayed that way for weeks because I just wasn’t finding time to write it. So I started getting up early to put in an hour’s writing before going off to work. That was twenty years ago and I’ve done it ever since.

This has changed, but only a little, in the last six months as I am now working from home on a year’s ghostwriting contract. I still get up at the same time as always, if only because that’s also when my wife has to get up to catch her bus to work, and it would be unkind for me to be lazing in bed as she heads out of the house. I then do my minimum allotted writing stint in the morning, leaving me time for other stuff (maybe more writing, maybe another project, maybe just admin and so on) in the afternoon.

What would be your top tip for writers?
Read. Read widely, read often and note how they do it. You are not an overflowing font of creativity, however much you feel like one. Without other writers to dig into, all you’re doing is scratch mining your own talent and you’ll very soon run out.

Can you give readers a short passage from your book so we can get a flavour of what it is about?
This is from The Teen, The Witch & The Thief, now out electronically and very soon to be available in print. Ted is a 16-year-old Salisbury lad and the scene is Salisbury’s Old George Mall.

The mall was turning dim as if a mighty thunder cloud had moved in front of the sun, though when Ted instinctively glanced up he could see the sky was clear. And when he looked back down, his heart began to pound. The gloom that surrounded the house seemed to be spreading, and as it spread, so the shoppers and pedestrians were growing dim too. In fact, they were turning transparent. The noise of chatter and music and traffic faded to a background murmur.
Ted glanced quickly down at his hand, front and back, suddenly desperate for assurance that he was still here: still solid and in full colour. Something bright flashed in the corner of his eye, back in the direction he had come from, and he felt a stab of gratitude because obviously not everything was fading. He looked back and saw the woman.
He couldn’t have missed her because she was easily the most colourful and most solid thing in the mall, and anyway she would have stood out anywhere. Long robes of gold and purple billowed as she moved, bedecked with silver lines and symbols that pulsed with a life of their own, like watching an animation of electrons move along the paths in a silicon chip. She moved through the crowd slowly, peering into the ghostly face of each passer-by; obviously looking for someone, because with each man or woman she would shake her head with impatience and move on to the next. Her lined face reminded him of his grandma’s generation, but while Ted’s grandma was generally nice to be with, her face kind and warm, this woman looked harsh. Her eyes glittered and her mouth was clamped into a straight line. After each disappointment it clamped a little harder.
At first Ted thought she wore a weird kind of hat until he saw it was actually her hair. It was silver with age and cut into the shape of a V so that the point hung down between her eyes. The strands were hung with jewels and gold filigree.
And then those unsympathetic eyes settled on Ted. The mouth quirked slightly in what might have been a small smile and she started to walk towards him. She walked right through a small family of dad, mum and small kid in pushchair, and neither she nor they seemed to notice.
Ted’s nerve broke. He turned and ran.

What are you working on at the moment?
The ghostwriting is earning my bread and butter, but I can’t really talk about that.

After 5 professionally published novels I’m experimenting with self-publishing, with the aforesaid The Teen, The Witch & The Thief and its sequel, The Comeback of the King. I expect it to be an interesting learning exercise. Print editions will be via CreateSpace and electronic editions are already available via Smashwords. Next step is possibly making a Kindle version available, though I’ve heard Amazon can be their usual dog in the manger with Kindle and insist on electronic exclusivity, so that will muck up the Smashwords deal. Or maybe it won’t – I look forward to exploring it all in more detail.

And then, the next thing I hope to turn to is my stalled Napoleonic fantasy novel … if I can only work out what happens next.

Can you tell us a bit about it, without giving the game away of course?
Years ago – and I wish I could remember where – I read a throwaway line that when Napoleon surrendered to the British, he hoped to live in exile in Great Britain, “on a small estate south of Oxford”. He had never visited Britain and probably just plucked this out of thin air because he had heard of Oxford.

As I live in Abingdon, on a small estate south of Oxford – considerably smaller than the one I expect he had I mind – I felt it was my duty to write the novel of Napoleon in Abingdon.

In reality there was no chance of Napoleon ever being allowed to set foot on British soil and he was of course bundled off to St Helena. So, for Napoleon to make it here, something so strange must have happened that it could only be magic. So, the novel immediately had to be a fantasy. I have 87,000 words, a beginning and a middle … but no ending. Yet.