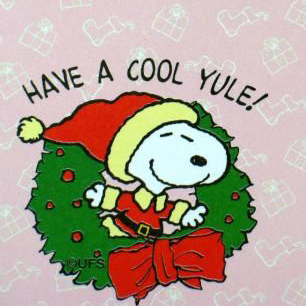 I used know exactly where I stood on the Happy Christmas / Season’s Greetings divide. It was firmly with the former, and when I ran my own company, I made sure that that was what the annual Christmas card expressly wished everyone.

Part of it is the realisation that there really are quite a lot of festivals around this time of year. I once visited Leamington at the height of the Diwali celebrations. There in the street was a large board listing all the other seasonal celebrations - including “25 December: birth of Lord Jesus Christ”. It wasn’t lost on me that this Hindu festival was the only time that year that I saw the root cause of Christmas acknowledged so publicly. And I couldn’t help thinking that if they’re prepared to extend the courtesy to us, we can certainly respond in kind.

Paul the Apostle, raised as a Jew and a Pharisee, doesn’t bother to hide his contempt for idolatry when he’s talking to other Jews, or to Christians who should know better. And yet, when he finds himself in Athens, a centre of all kinds of idolatrous religions, he is polite and respectful, seeking to find common ground en route to leading them to Christ.

There’s no point in putting people’s backs up for the sake of it, just because we’re can. As Paul also points out elsewhere in 1 Corinthians - it’s an amazing letter - our freedom to do something with a clear conscience does not come at the expense of other people's hurt. Other people are more important.

So that’s part of it.

And part of it is the increasing realisation that the Cross really is offensive to some. Not offensive as in the way Paul meant it - an insult to the intelligence of the wise - but offensive, as in, linked with hate preaching and hypocrisy. With a truly vile religious movement backing a truly vile world leader (no names …). Even with acts of murder and terrorism. People in the Middle East sometimes still refer to white Christian westerners as Crusaders - and it’s not a compliment.

We’re told not to hide our light under a bushel … but maybe we could still put a shade on it to reduce the glare?

So maybe I can compromise with the message at the top of this page. That should suit everyone. Except possibly Odinists but I’ll take the hit on that.

Ben Jeapes took up writing in the mistaken belief that it would be easier than a real job (it isn’t). Hence, as well as being the author of 5 novels and co-author of many more, he has also been a journal editor, book publisher, and technical writer. www.benjeapes.com
Christmas other religions sensitivity