Well, sometimes. I think there were other ideas. But being a very impressionable young person, every now and then I got excited about Writing A Book. 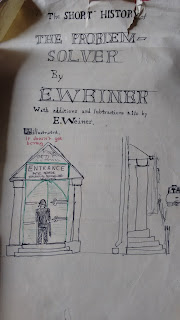 When I was about nine, I heard a programme on the radio about a child called Daisy Ashford who had written a novel, The Young Visiters; extracts were read from it. The idea that a child could write a perfectly respectable book from which extracts were seriously quoted on the radio was electrifying. I decided to write something myself. What I managed to produce was The Problem Solver,  a series of scenes in the life of a man called Matthew Sturrock, who tried to solve the usually ridiculous problems that people brought to his door in response to his newspaper advertisement. 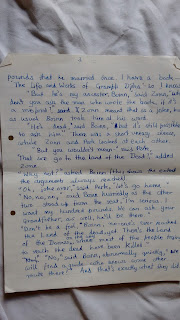 I can’t remember what inspired the next thing I wrote. In it three friends travel by magic carpet to the Land of the Dead in order to resolve a disagreement which only an acquaintance who’s died and gone there can settle. The Land of the Dead is very concrete and not in the least supernatural, as far as I remember. To my huge satisfaction, a family friend typed  out all this nonsense with five carbon copies, which was almost as good as a print-out in those days (1962). 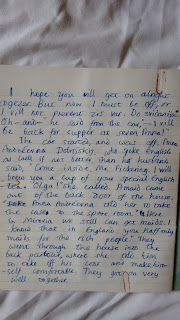 In early teenage I started reading Evelyn Waugh. It was either Scoop or Black Mischief that inspired me to write two stories about the adventures of an incompetent carpet salesman, Arthur Pickering, and his assistant Sam Handwich (groan), as they try to sell their wares in various ruritanian countries. By this time I was fascinated by Eastern Europe, Slavonic languages, archaic military uniforms, and peculiar political systems.

But already the fateful shadow of Tolkien had fallen on my life, and things would never be the same. Two or three dire and dismal attempts were made to write sub-Tolkienian fantasies. On the plus side, they led to two interconnected fascinations: drawing quantities of maps of invented lands, and devising names and scraps of language to support them. They also led into devouring legend and mythology and history. The influence of Narnia was strong too, so a children’s story featuring a structure through which the characters went into another world filled a few pages before grinding to a halt (and before many talking animals appeared). The problem was, I liked memorable characters and ingenious situations but I couldn’t think of a decent story.

My university studies largely answered the need in my life for epic, saga, romance, mythology, and ancient languages, some of which, indeed, I started to teach. And the job I ended up in was the logical outcome of these interests, but seemed to be miles away from writing imaginative fiction. It required the careful collecting of factual evidence, paying attention to the most mundane and trivial written sources, and dealing with discourse that was sometimes neither uplifting nor inspiring. 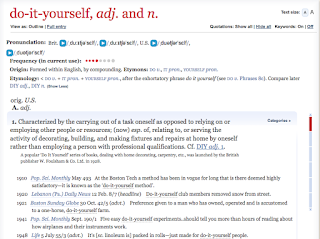 And yet… I have spent the last forty years helping to write the colourful biographies of thousands of words that form the vocabulary of the English language: effect, rorty, first aid,  of, do-it-yourself, get, unravellable, blue moon, toilet, cheers, rapture, not, existentialism, god, sh*t. The list goes on and on. Each one has parentage to be investigated, though all too often it is untraceable. Each one develops additional meanings as it repeatedly issues from the mouths of speakers. Some words remain small shrubs, while others develop numerous branches, dominating the language like ancient forest trees. Older meanings wither and drop off unpredictably. Words get interwoven, singly or in phrases, with other words. They become fossilized, specialized, rare, or totally obsolete. But every word’s life story is different, and fascinating.


Moreover, researching these biographies takes you to all places and all times: a raging Reformation controversy, a scene from Only Fools and Horses, Apartheid, a moment in Huckleberry Finn, a very rude passage in Chaucer, a very much ruder passage in almost any modern writer, a letter from Jane Austen, an Anglo-Saxon charter, an eighteenth-century West African trader’s accounts, a surfing magazine. You get to revel with the highest literature and grovel with the lowest.

And the supporting snatches of evidence are often rich in character. ‘It is better to trust in the Rock of Ages, than to know the age of the rocks,’ said W. J. Bryan, prosecuting at the famous Scopes evolution trial in 1925. Or Dorothy Parker in 1938: The two ladies were trying to get out of a doorway at the same time. Clare [Boothe] drew back and cracked, ‘Age before beauty, Miss Parker.’ As Dotty swept out, she turned to the other guests and said, ‘Pearls before swine.’ Or P. G. Wodehouse (1923): I never know, when I'm telling a story, whether to cut the thing down to plain facts or whether to..shove in a lot of atmosphere.

Providence has been kind. My fortieth anniversary in lexicography fell on 4 July, and that is why you are getting this rather egocentric blog post.
#Daisy Ashford #Lexicography #Narnia #The Oxford English Dictionary #The Young Visiters #Tolkien