The Joy of Rediscovery

One of the less-predictable things that has blind-sided me since the loss of my sister, three years ago, to cancer, at 35, has been the enormous distress caused by photographs – and not just in the ways you might think.

Of course, I look back through old photographs, mostly still feeling sad, though I’m told the time will come when I look back and smile. But the thing that squeezes my heart and plays on my mind the most is that there will never be any new photographs. When I’m searching for one for a blog or a Facebook post I’ve written, I find that I’ve chosen all the best ones before. I look in familiar laptop folders or browse back through my phone but to no avail. I’ve seen them all before. They parade before my eyes like familiar ghosts that have haunted me, since the photo-opportunities stopped, abruptly, three years ago.

But occasionally, very occasionally, I experience the joy of rediscovery. Accompanied, typically, by both tears and delight, a photo resurfaces from an unlikely source that I had simply forgotten about. 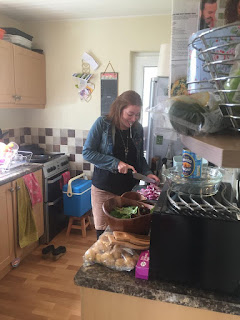 He, unlike me, is not really a photograph–taker. He photographs tools he would like for DIY; someone’s bathroom whose tiles he admired. This photograph was unearthed because he was scrolling back a few years, on a quest to find a photo of a log-burner he had snapped and would like to replicate for himself.

I’d forgotten about this photograph – this day, in fact. It was an ordinary, family occasion – a barbecue. My sister was trying to convince me that biting a teaspoon prevented tears when chopping an onion. We laughed at her, as she demonstrated. After this, I tried it too and we laughed.

What an ordinary moment, captured in an ordinary photograph, but how much more precious and sacred it is now, than it was when it was taken. What a joy to rediscover it.

I’ve had the same experience with some of my writing. Sometimes it’s good to go digging and see what languishes, forgotten, in notepads and laptop files. Sometimes unearthing, afresh the “embryo-idea-that-was-never-birthed,” or the “dreadful-never-to-see-the-light-of-day” scrawlings or the “perhaps-this-could-have-a-part-two-now-time-has-passed” blog post can kick-start some fresh ideas in our writing. I recently shared, with a friend, a humorous post about my then six and three-year-old, which ended, “I wonder what life will be like in another six years’ time with a twelve-year-old and a nine-year-old.” Well here I am! Perhaps it’s time to write that sequel. I hadn’t thought of it until it came freshly to light.

So go on - It’s a rainy Sunday afternoon (well – I’m not prophetic but it’s October in the UK so it’s a fair assumption) – what have you got to lose? Get digging. Perhaps you, too, might experience the joy of rediscovery, as I did with my photograph – and it might just send you back down a worthwhile path of your writing journey that you thought you’d left behind. 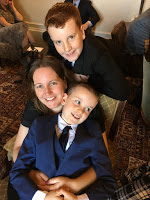 Georgie Tennant is a secondary school English teacher in a Norfolk Comprehensive.  She is married, with two sons, aged 12 and 9 who keep her exceptionally busy. She writes for the ACW ‘Christian Writer’ magazine occasionally, and is a contributor to the ACW-Published ‘New Life: Reflections for Lent,’ and ‘Merry Christmas, Everyone,’ and, more recently, has contributed to a phonics series, out later this year. She writes the ‘Thought for the Week’ for the local newspaper from time to time and also muses about life and loss on her blog: www.somepoemsbygeorgie.blogspot.co.uk