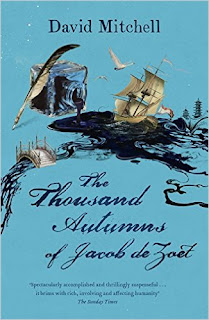 I’ve just finished The Thousand Autumns of Jacob de Zoet by David Mitchell (not the comedian).

It’s a historical romance, published in 2010, set in the Dutch trading post at Nagasaki in 1799/1800, when Japan was closed to all foreigners except the permitted few. It’s extremely well researched and very entertaining - Mitchell is the master of putting dry one-liners into the mouths of his characters that the characters did not intend to be funny. And it’s moving, with an honorable and decent hero who resists considerable temptation to be dishonorable, and gripping, as the plot slowly emerges and comes to a resolution. Until then you can just sit back and enjoy the writing.

One secondary character in particular stands out. He is very much a Renaissance man, a skilled and cultured individual, who plays an indispensable background role.

But because I’d already read David Mitchell’s later novel The Bone Clocks, I knew a bit more about this chap than ever becomes apparent in the novel. I knew he’s one of a race of immortal spirit beings locked in an eternal struggle with psychic non-corporeal vampires. Stop laughing, it’s another very good book with real sacrifice and tragedy.

You can read The Thousand Autumns ... without needing to know any of this. There is nothing overtly supernatural about it. There is a reference to this man being an ‘old soul’, and there is a bad guy who claims in a throwaway line to be 600 years old - though he is a deranged madman anyway, so maybe not to be taken seriously. But that’s all. But if you have read The Bone Clocks then you become aware that The Thousand Autumns ... describes a skirmish in the later novel’s battle, told from the points of view of bystanders who have no idea what is really going on and are applying their own understanding to - well, everything. It’s a glimpse of a much bigger picture inside Mitchell’s head that he reveals to his readers little by little.

Apparently Mitchell does this frequently - use and reuse characters in different books so that you can either read them as is, or be informed by a much deeper contextual understanding. I look forward to reading more of his stuff.

In fact, his style reminds me of … the Bible. Every book of the Bible must have been written to meet a specific need apparent to its author(s), but I wonder how many authors knew that their book would one day be bound together with 60+ other books, and would be read in the context of those other books? And in whose context their own book would be read? When Malachi wrote “Then suddenly the Lord you are seeking will come to his temple” did he know that one day the Lord Himself would do exactly that - appear in his temple, to the non-recognition of everyone?

And I love to think that our own lives have a context, even if we don’t see it. The books of our lives can be seen in the context of the books of lives older than our own and not yet written, and one day we may have the privilege of seeing the biggest picture of all.