A struggling scribbler from Kent... by Sue Russell 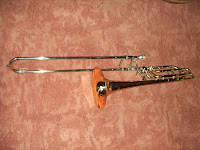 A favourite quotation of mine comes from the composer Gustav Holst. 'If nobody likes your work, you have to go on for the sake of the work. And you're in no danger of letting the public make you repeat yourself.'
In the early years of his career Holst couldn't earn a living from his composing and instead played the trombone professionally. It may have been his failure to attract an enthusiastic following initially (rather a common experience!) that made him particularly aware of the dangers of taking oneself too seriously, and perhaps we should be too. In fact as Christians we should be less prone to this peccadillo than most artistic navel-gazers; we believe, don't we? that God has equipped us with certain gifts and we are to use them for his glory and the benefit of others, leaving the outcome to him. If we can put this into practice, it's quite a relief. I'm as susceptible to worrying about reviews (or the lack of them), who likes what I write, who doesn't, and all the rest of it, as anyone. But how wonderful to realise it's not ultimately my problem!
So in pursuit of a little light-heartedness I thought I would tell you about a small celebration coming up, as it happens on the same day as this post is published. I belong to two writers' groups, the ACW one and a secular group which I have been attending on and off for several years. Instead of a Christmas party or meal one of our group has invited us to her house for dinner - and something which has become a tradition: a limerick competition. She and her husband have recently moved house, and none of us has seen the new place yet, so the subject of the limericks is 'Moving.' Each of us has been asked to submit a limerick ( or two), and since my husband is not literarily inclined (apart from being a discerning reader, and supporting my efforts) it falls to me to compose one for him. I did a tiny bit of research about limericks and found that the form has been around for  centuries, usually as a vehicle for smut and scurrility, but was popularised by the multi-talented Edward Lear, whose limericks, while silly, were at least clean. I freely admit I find cooking up idiotic limericks a lot easier than blog posts.

Here's the one I'm thinking of submitting on my husband's behalf, and I make no apology for frivolity.
A lonely young lady from Leicester
Whose life, she decided, depressed her
Got fed up with waiting
And tried online dating.
Now she lives with a wrestler in Chester.

Let's hope and pray that the coming year gives us the opportunities we seek to move forward ourselves, to advance God's kingdom and glory rather than our own, and have a little fun at the same time.
Happy New Year! 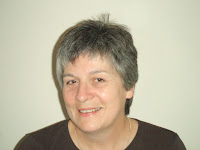 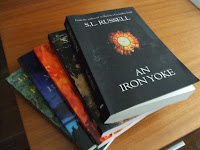 Sue Russell writes as S.L.Russell and has five novels available in the usual places. Leviathan with a Fish-hook, The Monster Behemoth, and The Land of Nimrod are a trilogy, then there are two stand-alones, A Shed in a Cucumber Field and An Iron Yoke. A sixth should be making an appearance early in 2017.

Sue lives in Kent with her husband, currently one grown-up daughter, and Rosie the dog. She is an amateur singer and a church organist, and blogs at www.suerussellsblog.blogspot.com