I recently posted on Facebook that I was halfway through writing my current novel and that I had more loose threads than the Bayeux Tapestry. “Just as well Poppy [my lead character] knows what’s going on, because I don’t!” I complained. Invariably, fellow writers empathised, offering encouragement such as “Just follow Poppy, she’ll lead you through it.’ Or “I love it when that happens, it becomes an adventure and I’m excited to see where it leads.” Or “My characters also seem to have a mind of their own!”

But the non-writers said things like: “But surely you are in control of what happens; you’re the writer, aren’t you?” Or “How can you not know where you’re going? You’re the one making it happen.” Or “But hang on, aren’t you Poppy?” They all seemed to assume that writing was an activity of the conscious mind.

I tried to explain that creative writing is an interplay between the conscious and sub-conscious. This attracted lots of ‘likes’ from writers, but by then the non-writers had lost interest and moved on. 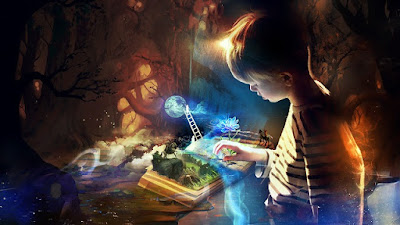 So that leaves me with you writers. The best kind of art is suspended between two worlds: the conscious and the sub-conscious. Creative people know that the source of their inspiration and their most surprising ideas often come from the sub-conscious. Some people are able to mine those depths with ease, for others it’s more difficult and they speak of things like ‘writers’ block’ or ‘not being able to get into the flow’. During the Romantic Period artists and writers began to experiment with mind-altering opiates to help them clear the pathway to their sub-conscious. [Writers and their drugs of choice]

Most famously, perhaps, was Samuel Taylor Coleridge who wrote Kubla Khan on an opium high. When the drug wore off he was unable to finish it and he was never again able to find the pathway that took him to it. His opium addiction finally killed him. Aye, and there’s the rub.

If we use substances to help us access our sub-conscious they can not only cause health problems but creative problems too. We need to be able to move between the sub-conscious and conscious at will. We access the sub-conscious to get our ideas and ‘get in the flow’ but then we use the conscious mind to shape, craft and edit. As I once joked with my uni scriptwriting students: “If you write with wine you should edit with coffee.”

Here are some ways you can access the sub-conscious without resorting to alcohol and drugs.
Fiona Veitch Smith is a writer and writing lecturer, based in . She writes across all media, for children and adults. Her formerly self-published children’s books The Young David Series, are now available from SPCK. Her mystery novel, The Jazz Files, the first in the Poppy Denby Investigates Series (Lion Fiction), is due out in September 2015 but can be pre-ordered now. http://fiona.veitchsmith.com
#writers block #creativity #TheJazzFiles #FionaVeitchSmith #sub-conscious #prayer