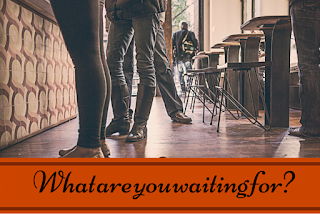 In the building trade there is a familiar prank pulled on young apprentices. They are sent to merchants to go and buy a long weight, the merchants well aware of this prank will leave the apprentice standing at the counter while he goes in the back to fetch one for him. When he returns sometime later and the apprentice asks for the item the merchant tells him he's had the long wait. It's a bit of fun but sometimes waiting isn't fun!

Having submitted my proposal to a publisher I waited. Many publishers are clear that after a certain period of time, in this case 8 weeks if you've not heard from them you can assume they're not interested, but you won't be told.

I'm not bashing publishers it's the same when you're job hunting. You complete the forms, update your CV and write a covering letter and send it all off. The you hear nothing, again you will only hear if you get the job otherwise just assume you weren't successful. This seems to be the normal way for many businesses to operate.

How is the case when we live in an instant world where it's never been easier to send a reply? With a standard email saved into your templates a decline can be sent with minimum effort, even if there are a number to send.

Why does it matter? In my younger days of job applications and working in recruitment it was considered polite to respond even if the answer was no. I'm only talking up to 20 years ago and we had to do it by letter! A standard letter already saved but it still had to be printed and posted, by today's standards it took ages.

Have we all become so busy that a quick response is too much time to give someone?

Is it down to the sheer volume of applications and manuscripts passing through the inbox?  I understand there are reasons explaining away the lack of response but are we justifying impoliteness? How is this trend being seen in our our own lives?

Don't we do the same? I've forgotten to reply to a text message or two, missed an email that needed a response, taken a week to respond to a comment on my blog.


In a digital age have we forgotten that on the other end is an actual person with feelings? (Tweet this thought)

Is it time to remember we are not responding to a text, an email or a comment but to a person, an actual human being who has taken the time to connect with us in whatever form that may take.

We are called to love one another, to encourage and build each other up. What better way than a simple reply?  Let's not live a life too busy to love.