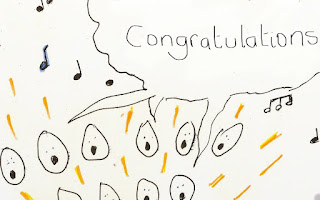 One of the joys I have found in writing is when there is an opportunity to write for a small group of people who share a relationship or experience that can be affirmed or fostered by the writing. I have had a recent opportunity to do this for an 18 year old grandson, Thomas, who, until recently, had been amazingly faithful to a somewhat gruelling weekend job at a local pub. That got celebrated by the following verse which was the third verse of five in a song which was singable to ‘While Shepherds Watched’ - and sung at his family birthday party.

He’s practiced at the Pike and Eel
With water cold and hot.
There he’s washed several thousand plates
And knives and forks and pots.

There was a particularly touching back story to writing this particular song. When Thomas was much younger, I had written a similar type of song for his mum when she turned 40. On the evening of his mum’s celebration, Tom was not at all well and while the song was being sung, he sat himself on his own in the middle of the community hall where the party was being held, looking utterly woebegone and as if all he wanted to do was to be taken home (he was, shortly after.)

On this occasion, there was a chorus to the song, sung to ‘The Holly and The Ivy’. It went

O she’s……Coming up to forty,
Yes! Helen sure looks great:
O what a very special year

Some four to five years later, we were sitting around with the family and Thomas, then about 10 or 11,  who I would never have believed could have taken anything in at his mum’s celebration, quite out of the blue broke into ‘O she’s coming up to forty’. Quite startling! But an amazing endorsement of how something quite simple can impinge on the memory.

Of course, if writing verse is not your genre, this might not appeal as an idea - but with a simple rhythm, access to a thesaurus and to a rhyming dictionary only a click or two away, it should be comparatively simple for anyone who loves writing. Thomas was delighted with HIS song, as his mum had been before him. So I encourage anyone who reads this to have a go at emulating the idea - although you might want to take a view of how large your family is - for I am now more-or-less expected to produce a song for every major birthday of anniversary! But I take that to be an indicator of just how much it is appreciated. So, why not give it a try? I think you will find you have some delighted ‘subjects’. And, as to audience, well, they are, realistically likely to be more immediately engaged than many who will read much of our usual output.