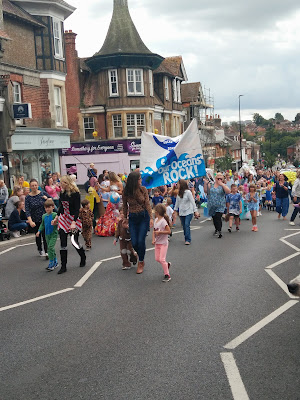 Guy Fawkes bonfire night celebrations are not here yet, except in Sussex where they begin on the first Saturday in September and continue every Saturday until late November. Why? was my first question when someone at our new church told us about it.

Apparently, it all started in the 16th century with Mary, Henry VIII's Catholic daughter. After she became queen, she tried to stamp out the effects of her father's reformation, burning many protestants at the stake. In response to this, societies were formed and they would process through towns and villages carrying flaming crosses to commemorate those who had become martyrs for their faith and to symbolise freedom of expression. Later, with encouragement by the authorities and the church to celebrate the arrest of Guy Fawkes in 1605, the celebrations eventually expanded to include bonfires, and fireworks and they became common all over the country on 5th November.

Today, the longer version of the tradition is alive and well in many villages and towns in this area. Bonfire Societies meet throughout the year to plan how to raise money for fireworks, cut wood to make flaming torches and plan costumes and 'tableaux' for the bonfire processions. Money is collected for charity during the parade. Our town's is the first and took place last weekend accompanied by food stalls, schools processions and a fair on the green. All the societies from different villages in the area joined our procession and every Saturday for the next two months ours will go and join processions in other villages. The Lewes one is the biggest but I thought ours was fabulous, with dancers, jokers, kings and queens, Red Indians and all sorts of other themes. We wheeled my in-laws down to their corner of the high street to watch the procession and eat chips. 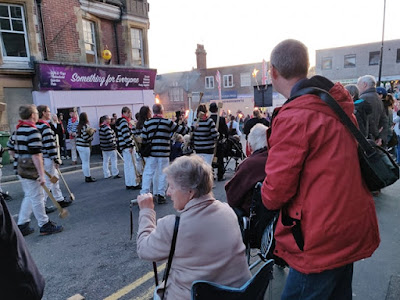 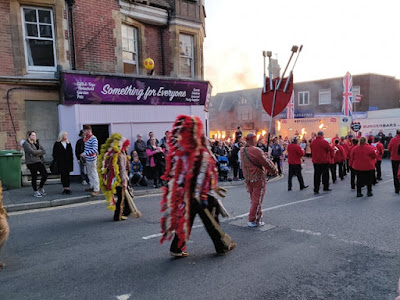 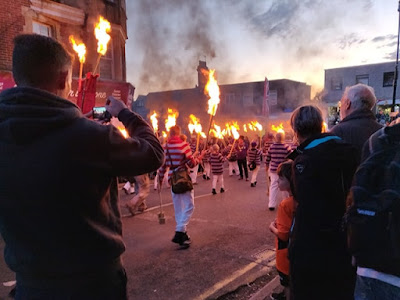 It got me thinking about traditions. Many people may not even realise the original reason for the processions which is a shame but doesn't necessarily diminish their impact. People in communities come together to process or to watch, to sing and dance, eat chips and watch the processions, waving at people they know who are taking part. This is our third Bonfire Procession which means we've been here a while. It makes me feel I belong. There is comfort in traditions.

I thought I'd research the traditions/habits of well known writers. Here they are -

1. Maya Angelou rented a hotel room so she could 'go to work'. She'd lie across the bed while she wrote, staying there until around 12.30 after which she'd go home and 'try to breathe'. She'd look at her work again around 5 pm. She'd cook herself a 'proper dinner' and relax in the evening and she'd be off out at 6 again the next morning. Her 'treat' was a glass of sherry around 11 am.

2. Stephen King sits down to write between 8 and 8.30 every day and always has a glass of water or cup of tea on the go. He has his vitamin pill, turns on his music and always sits in the same seat and has his papers arranged in the same way. A strict routine, he says, helps you say to your mind 'You're going to be dreaming soon.', It's no different to having a bedtime routine.

3. Ernest Hemmingway wrote standing up and started early, around 6 am, stopping around 12 or even before. He would reread what he'd written the day before and go on from there which was straightforward because he always stopped when he knew what was going to happen next. He said it was normal to 'feel empty' after pouring all his words out on paper.

4. Dan Brown punctuates his writing every hour to do stretches, push-ups or sit-ups. He likes to start writing at 4 am to avoid being disturbed. He starts with a spinach smoothie and a coffee and writes for 6-9 hours although some of this will be editing what he's done the day before.

5. Virginia Woolf wrote in a lodge in the garden of Monks House, only a few miles from here. She commuted to the lodge daily and was famously messy with a desk always strewn with books and papers. She said "A woman must have money and a room of her own if she is to write fiction."

6. Deborah Jenkins (lesser known) writes in the mornings, unless she's supply teaching, in a little room full of childhood books and a stained carpet (but at least it's her own). She's not a morning person so will probably never be as successful as the writers above who get up annoyingly early to write. She rises about 7.45, does her Rosemary Conley Work-out video, lumbers into the shower and begins writing about 9 with strong coffee. She writes until lunchtime and then eats a lot, thus negating the effects of the workout video but by then, as long as she's done 1000 words, she doesn't care.

Like the Bonfire Societies, these traditions may be re-enacted by others, to help them write. I like Stephen King's idea of a writing routine similar to a bedtime one. What are your writing traditions, habits that keep you on the writing road?

Click on the link to view the novella on amazon
Deborah Jenkins is a freelance writer and school teacher, who has written articles, text books, devotional notes and short stories. She also writes regularly for the TES. She has completed a novella, The Evenness of Things, available as an Amazon e-book and is currently working on a full length novel. Deborah loves hats, trees and small children. After years overseas with her family, who are now grown up, she lives in East Sussex with her husband, a Baptist minister, and a cat called Oliver.