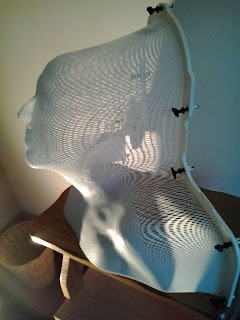 The photo series Incorporated here tries to capture some of the most significant markers of the time since I was diagnosed with non-Hodgkins Lymphoma in early October. Let’s explain the picture before I invite you to hear something of  my journey through chemotherapy, then radiotherapy. (in CANCER1 and CANCER 2 - Links at bottom of this post)

The somewhat strange mask may only be recognizable to others who have experienced radiotherapy targeted at the throat, chest and other locations in the top part of their body. The mask is moulded to the contour of the face – and in my case to the shoulders as well. It is done by immersing a flat forma in hot water which is then dried and pressed down over the head, neck and shoulders. If you look carefully round the edge, you can see some of the nine pegs that are pressed down to keep one perfectly positioned and immobile on the treatment ‘bed’, so that the radiographers can be sure that the residual cancerous cells left after the chemotherapy are precisely targeted. An amazing part of an even more amazing equipment array where the treatment takes only a couple of minutes each day (for 15 consecutive weekdays in my case, though some have much longer spells of treatment). It does feel somewhat claustrophobic, but the staff  have been constantly caring, compassionate and ready to explain what is going on throughout. It is disturbing to think about children who might have to undergo such treatment but I was told of one of the radiography team who realised that decorating the children’s masks with their favourite cartoon character could make the experience far less fearsome. Good to hear she received a hospital award for her thoughtful inspiration - and I leave you to imagine smaller masks than that in the photo above decorated as Spiderman or Anna/Elsa from ‘Frozen’. 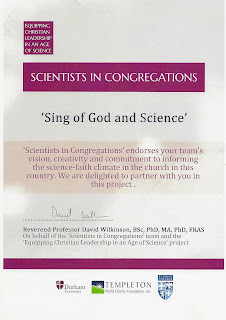 The ’Scientist in Congregations Certificate' represents the ‘Sing of God and Science’ project I have been organizing, coincidentally, throughout the period of treatment. It has been a splendid distraction from what is going on with me internally. More about it later. 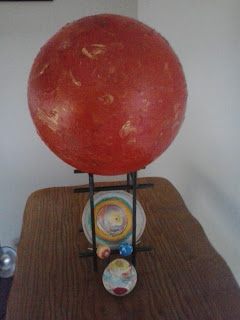 The small display mounted around the orange painted ball represents our sun and its planets and therefore, one of the topics that motivates me to write creatively about faith and science. Much of the material for this blog, which, in bursts, consumes a considerable amount of my time, seeks to encourage people to see faith and science as twin revelations of the glory of God in his universe. (and splodging acrylic paint on to the football-sized sun was a delightful diatraction for a couple of afternoons!) 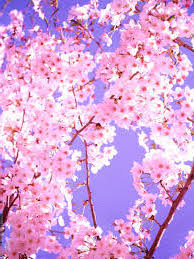 Pam and I often talk about her enthusiasms being for the beauty immediately surrounding us and mine being for the beauty in the far reaches of the universe. We are not quite that polarized, so the small flower display in the photo above celebrates the astonishing bounty of blossom and flower that has grown rapidly day-by-day as we have visited the hospital over the last three weeks. A true blessing. 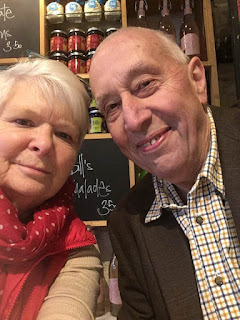 Finally, there is our photo. Pam has been a magnificent carer since the cancer was diagnosed and has worked hard to ensure I don’t over-reach myself. One of my regular prayers  throughout this time has been for those who have to make this journey on their own: it must be harrowing. The photo was shot during our joint breakfast celebration of the end of radiotherapy and our 36th wedding anniversary. We have looked for little ‘treats’ like this through the treatment period and they too have been a real blessing.

But now another period of waiting. This time some 6 to 10 weeks, being the period that will ensure inflammation from the radiotherapy does not get interpreted as a residue of the cancer when I have a further scan which may, if we are fortunate, end the treatment, though we inevitably don’t know if that will be how it will be.

More or less whenever there is a conversation with another cancer patient, the subject of waiting comes up. Most accept that there is an inevitability of having to wait for consultations to happen: blood needs to be tested, weight needs to be assessed before the consultant can commit the patient to the next treatment, normally the next day. But it is often the waiting between treatments and for subsequent assessments that make the experience tiring and even distressing for both patient and (where relevant) carer alike. How will we feel tomorrow/ three days time/ next week/ a month’s time. One cannot know, so something of every affected life goes ‘on hold’. For those who experience some of the worst side effects these can be gruelling times. For everyone, they add to the air of uncertainty of whether cure will be the outcome or its dreadful alternative. Facing the latter needs all the help, compassion and bravery that can be mustered: knowing that others are praying can be hugely helpful as it has been for us. But never easy, and MacMillan, chaplaincies, hospices and other services do magnificent work in this area and themselves deserve support and prayer.

My path, so far, has been an easy one compared to many of the stories we have heard and I daily give enormous thanks for that. For this reason, I have minimized the writing I have done about the cancer, so as not to discourage those who are suffering far, far more . So, by w ay of just a minor example, losing hair for a man is really no big deal these days; for women it must be so much more difficult. But there are many patients for whom we can only pray and offer a listening ear, whilst knowing that the mystery of healing is beyond us to understand and may be a gift to many, but not to all. It is particularly difficult to have any idea what to say to children and their parents caught in this cycle: undoubtedly, something deeper than ordinary wisdom is needed.

For me, one of the things that has unquestionably helped has been to recognize the gifts and blessings that have surrounded our path, many of which are hinted at in the photo-montage. Broadly these have been;

Knowing just how hugely we have been held in prayer by friends, family and many of the Christians we have encountered in a variety of ways, some apparently quite superficially. We have realized over and over again what an extraordinary fellowship, this world-wide fellowship of Christ, truly is.

Being deeply thankful for each other as we travel.

Being immensely thankful for our surroundings, a comfortable home, a nurturing community and the massive gift of being very close to Addenbrookes, so travel to and from the hospital is minimally difficult compared to that of many.

Noting the changes of nature around us as we have moved from winter to spring. That itself has brought hope, and the changes in the last few weeks are nothing short of magnificent. We have, perhaps unsurprisingly, been more acutely aware of them than ever before.

The involvement with the ‘Sing of God and Science’ project has been enormously helpful. The cancer charities all recommend finding or taking up an interest that can be a diversion from the illness and its symptoms. ‘Sing’ has been extraordinary in doing just that. We have now gathered more than 35 songs for singing in school assemblies or all-age worship, a publisher in the offing (we hope) and enormous enthusiasm from a very wide range of people who have become involved with the project in many, many different ways. Nine schools have contributed original songs and we are now looking forward to the performance of those songs in our Cathedral in nearby Ely at the Science Festival in late May. Pam, illustrating her ongoing deep concern for me remains anxious that I will be fit enough to enjoy the day: this is one of the manifestations of the inevitable anxiety a spouse/ carer can feel. Overall, the project has been a huge blessing (though Pam would also say a tad obsessional at times!) for which I give repeated thanks.

Finally, I want to close this lengthy piece with a tribute and our profound gratitude to all the staff at Addenbrookes in Haematology, Oncology, Radiotherapy, and the Pharmacy - both medical and administrative staff. You have been unfailingly magnificent; courteous, caring, concerned, amenable, helpful when our needs were different to yours and watchful of those needs. Thank you all so much. We have seen small glimpses of the pressures you are under and we know of some of them through the media. Without exception you have managed to avoid passing any stress on to us and we are very, very grateful.