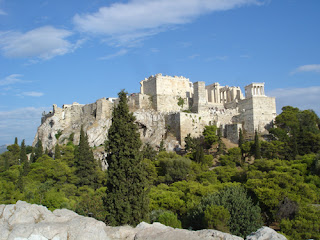 Paul’s speech includes the words “God … does not live in temples built by human hands.” Which is true enough. But did you know that the backdrop to anyone standing on the Areopagus would be the mighty Acropolis, towering above them? As Paul speaks, picture the sun gleaming behind him off the white marble pillars of the Parthenon, one of the greatest temples in the world. Imagine him jerking his thumb over his shoulder at it, or maybe more politely inclining his head towards it, or just not drawing attention to it at all, but knowing it’s there, as he says “... temples built by human hands”.

When I picture that in my mind, I find Paul’s sermon becomes twice as powerful.

In some writing the setting practically becomes a character in its own right. Wuthering Heights could have exactly the same relationships between the characters if it was set in a modern semi, but it would have a lot less impact. For the current work in progress I’ve just written a scene where two strangers meet. One of them is older, clearly more confident and experienced in life - but then they go to the home of the other, and immediately the older one is on the back foot because the other is now in his home territory. There is a subtle but (I hope; never trust a writer’s opinion on anything they write) definite shift in their relationship, which describes and shapes their characters in a way that couldn't happen if they just chatted at the pub.

The most basic way of getting information into the reader’s head is narrative: he did this, she did that. A subtler way is through dialogue, though at its most basic that too can be used to spray information at the reader. The subtlest way is through location and context. A character might walk across Westminster Bridge and see a newspaper headline, “Prime Minister to address House”, and think nothing of it it - but if the novel is set in September 1939, the reader gets a whole load of background and other nuances uploaded direct to their brain. Other dates would also apply for different effects: 31 October 1956 (Suez Crisis); 28 November 1990 (Thatcher resigns); 13 September 1999 (Moon blown out of orbit [not really]).

It doesn’t have to be that dramatic, but unless your novel features two disembodied brains communicating by telepathy, everyone is somewhere, and the reader needs to know it. One line will do it. Half a line, even. “They talked as they rode their horses” tells you nothing; “They talked as they rode through the dripping green trees / across the sunbaked sands / along the lake shore” immediately says more. Let the reader have the fun of conjuring up their more precise mental images; you’ve given them the seed, which is what counts.

Ben Jeapes took up writing in the mistaken belief that it would be easier than a real job (it isn’t). Hence, as well as being the author of 5 novels and co-author of many more, he has also been a journal editor, book publisher, and technical writer. www.benjeapes.com
location Writing