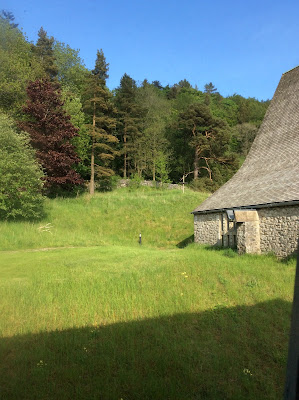 Did you know that a group of writers is called a worship? That's what was happening at Scargill House last weekend. A bunch of people worshiping.

Many of us have become friends online and it was good to meet for the first time 'in the flesh' or catch up with real rather than virtual hugs.

Adrian and Bridget Plass were our hosts along with Tony Collins, standing in for his wife Pen Wilcock who was at home because of family commitments.

The theme of the weekend was the great escape. Bridget began on Friday evening by reminding us of our favourite children's stories when we were small. Where did we escape to? I was immediately transported to a small, hidden island on a lake with friends Mike, Jack, Peggy and Nora, some hens and a cow.

Adrian shared that writing fiction is a form of playing. As children, we lived in our imaginary worlds as cowboys or horses or children having adventures while drinking lashings of ginger beer, without worrying about who was watching.

We need to recapture that playfulness as writers. Play with words, have fun, don't worry about who may be watching. When we can do that, we find freedom in our writing.

Tony based his talk on Romans 12:2, encouraging us not to confirm to the world but to be transformed by the renewing of our minds so that we can know God's good, acceptable and perfect will.

Good fiction affects how the reader sees the world. The imagination is a powerful tool. Apologetics and precepts are for the mind, but stories reach the heart.

Fiction creates an alternative reality for the reader. We get to live the lives of the characters for a while. For me, whenever I read John Grisham's books, I can think of nothing better than to work eighteen hours a day as a lawyer. In real life, I find law boring and I'd hate to be a workaholic. But Grisham grips my imagination so powerfully, that for a while I enjoy sharing the life of his characters.

Tony encouraged us to try contradicting stereotypes in our writing. Fatty, AKA Frederick Algernon Trotteville, from Enid Blyton's Five Find-Outers and Dog sprang to mind, when he said that. An overweight boy with an excessive amount of pocket money and indulgent parents, we make certain assumptions. But actually Enid Blyton makes him an intelligent and generous leader with oodles of common sense.

Both Adrian and Tony gave us a challenge. Maybe you'd like to have a go at one or both yourself.

Adrian's challenge: in 300 words, play with words and have fun. Don't worry about who's watching.

Tony's challenge: in 300 words, write about a journey. Why did you set out? Where did you think you were going? What happened on the way? Where did you arrive? What impact did it have? Would you do it again and why?