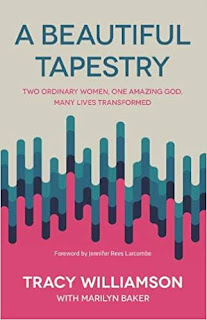 On 12 November, I had the privilege of attending the online book launch for A Beautiful Tapestry, by Tracy Williamson with Marilyn Baker. I was not asked to plug the book here, but I am choosing to, because it’s a great book. Have a look, and you can watch the launch, too:


During the day, before the launch in the evening, my internet decided that it didn’t really want to work. I really needed it to work, at least briefly that evening, as I had been asked to say a few words.

So I sent out a few texts – and emails if I caught the internet at the right time – asking people to pray the internet would play ball.

Prayers were answered, and the internet remained connected for my little slot.

A few days later, Tracy and I were chatting, and she asked what I’d thought of the slide show of photos at the end of the launch.

I had to confess that I hadn’t seen it.

You might suppose, from what I said above, that my internet had given up by that point.

In actuality, hard though it may be to believe, the laptop had switched itself off because – wait for it – I had not plugged it in.

I had been so busy focussing on the fact that the internet might not work, and worrying about that, I hadn’t noticed that the laptop was not plugged in. It was not connected to a power source. It was relying on battery which, inevitably, would run down.

I wonder if perhaps we can be like that?

Busy focussing on deadlines, or writing, or lack of writing, or whatever it may be that’s going on. Big things, things we ask people to pray about (and rightly so). And, as we focus on them, we forget to check that we are connected to our Power Source. Connected to God.

We’re relying on ‘battery’ which, inevitably, runs down.

When I told Tracy that I hadn’t seen the slide show, she said, “Oh that’s a shame. I wanted you to see it, because you’re in it!”

Was I? That was news to me, because I’d missed it, because my laptop was not plugged in.

The internet connection could be as strong as ever but, without the laptop being plugged in, the internet was void.

I was in the slide show, I was there, but I didn’t see me.

Jesus spoke to His disciples when they had been busy, focussed on other things, checking their ‘internet’ was working, perhaps worrying about it too. And what did He say?

All that the disciples had been doing was good. They’d been telling people about Jesus.

And Jesus said, in their busy-ness, just as He says to us in our lives,

Don’t forget to plug into Me.