No, I haven’t broken lockdown rules, I have Zoomed with my nieces and nephews. I have been blamed for encouraging their imaginations quite ridiculously, and I’m delighted to be deemed worthy of such an accolade.

Earlier this week was beach day. Before we ‘left’ for the beach, it was essential – as anyone who has ever spent a day at the beach surely knows – to pack things to take. Things we’d need when we got there.

First on the list was buckets and spades. My six-year-old nephew quickly volunteered to go and get them, and so disappeared off screen. His four-year-old sister rolled her eyes, “I’d better go and help. My husband can’t find them.”

I thought that was hilarious, and put it on Facebook, where others agreed with me. One friend commented, ‘little pitchers and all that’.

My niece had been repeating the essence of things she’d heard.

Isn’t that what we do as Christian writers? Repeat the essence, or even words, of God’s heart.

I’m fairly sure that, if my niece had never paid any attention to ‘husbands finding things’ comments, she wouldn’t have made such a comment herself.

High up on our beach list, at the children’s suggestion, was a wheelchair. That was for me. The children have observed that often on (non-imaginary) family days out, my wheelchair comes along too. So they made sure it was on the list.

They ensured I’d have the help I needed. 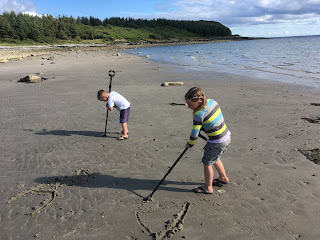 Yesterday, I Zoomed to a (non-imaginary) bible study. We looked at Matthew 11, and Jesus saying, "Take My yoke upon you...".

Jesus, too, ensured we have the help we need. He promised to share our loads.

But, in answer to the study question: ‘what strikes you about this verse?’ I put, ‘I forget to take’.

I forget to take His yoke upon me.

I ask for help, but without taking His yoke upon me.

I shout ‘Help!’ and He calls back ‘Will Do!’ as He points out His yoke for me to slip on. But by then I’ve screwed up my eyes so I can yell all the louder - ‘HELP!’ - and so I don’t see the help He’s offering.


God is our refuge and strength, an ever-present help...
Psalm 46:1a

Sadly, I don’t have space to tell you about all of our beach-bag contents, though be reassured there was money for ice-creams. Although that didn’t turn out too well when my niece, on sampling the ice cream I bought her, declared herself allergic to it, and proceeded to put on an all-too realistic display of being sick. I can only assume someone has been encouraging her imagination quite ridiculously.

You may wonder how we got to the beach. We travelled by car which, my nephew remembered, had a button that made it fly.

I pray that, as we live and write, we remember we don't need to imagine taking Jesus’ yoke upon us. We can know it in reality.