By Trevor Thorn - December 28, 2018
This might be helpful for any of your friends called on to lead an all-age service or Epiphany event
The Wise Men’s Tale (Matthew  2, 1 – 11): an interactive all-age story 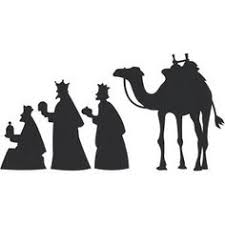 Here’s a way of telling the story of the Wise Men at an all age event involving both children and grown ups. Get the children to join you and split them into five groups (or five individuals) and sit on the ground in their groups - they won’t be sitting still for long so don’t worry if the floor is a bit cold). If you have a centre aisle of reasonable length, spread the groups down the aisle so is present as near a group as possible.
.
Name each group/ individual: One group has to remember ‘Caspar’, traditionally the name of one of the wise-men; the second remember ‘Melchior’ another wise man; the third group ‘Balthazar’; the  fourth ‘Camels’ and the fifth group ‘Servants’.  ALL THE CHILDREN have to listen out for their group’s name AND FOR the word ‘Caravan’

As you tell the story - each group has to stand up, turn round and sit down again whenever ‘their’ name is called and to do the same when ‘Caravan' is read out.

Start to read the story slowly so the children get the idea and so the smaller ones have a chance to follow the lead of the older children in their group. Then gradually speed up so the children soon have hardly time to sit down before they have to get up again. The children will enjoy the muddle and so will the rest of the congregation (unless they are very, very staid!).

THEN: stop the story where indicated in the script and invite everyone who can to join in each time ‘Caravan’ features

Once the script ends, go straight into whatever message fits your situation best. I like to go simply to how clearly God demonstrated the Good News of Jesus was for all people – not just the Jews.

Once upon a time, there were three Wise men who lived in the land we now call Iran. They were called Caspar, Melchior and Balthazar and they watched the stars every night to try and understand the meaning of their patterns in the sky.

One night Caspar called to Melchior “Quick! Go and fetch Balthazar then come and look at the sky with me. The three of them, Balthazar, Caspar and Melchior gazed into the Eastern sky where there was a star where they had never seen one before. Almost as they watched, it seemed to grow brighter.

Balthazar said “It’s a sign we’ve been waiting for”.

“Yes”, said Melchior, it’s the sign of a King important enough for the heavens to take notice.

Caspar said quickly “Let’s get our servants and camels and gifts and go and find him. The star is moving: it will lead us to him”

Balthazar, Caspar and Melchior called their servants. “We are going on a journey – we don’t know where and we’ll go in a great caravan to take gifts for the king which a new star will lead us to. Balthazar, Melchior and Caspar set out with their caravan.

After several days and nights, Caspar called to Balthazar and Melchior, “ I can see signs of a sandstorm, draw the caravan together so the camels form a shield for the servants and all of us. The storm came, swept over the caravan, leaving sand everywhere and passed on.

PAUSE HERE and invite EVERYONE who can to follow the  children’s lead every time ‘Caravan’ is read out.

The journey then led them through rocky mountains and deep streams. “Caspar,” Melchior said, “Balthazar, make the caravan travel as fast as it can. There are robbers in these hills but they won’t be able to catch fast moving camels. The caravan did spot some wild looking men at one stage but the camels were moving so fast the caravan soon left them behind.