Thoughts on being a pioneer 14th March 2018 by Susanne Irving 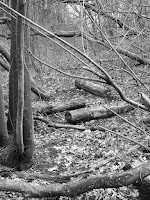 During Brian Draper’s Lent study, we received the task to find a “path that is a bit different”.
I decided to walk down a path on our local heath that I had always wanted to explore but had never bothered to - from what I saw it would end nowhere...

It was obvious that the path wasn’t used. There were thorny branches to climb over. The path went down a short but steep slope; I was looking for a branch to hold on to as the ground was slippery – but all branches I could see were covered in thorns.

I gingerly held a branch between a thumb and forefinger. The branch snapped under my weight, but luckily, I had reached the bottom of the slope by then. A few more steps - and I ended up in a cul-de-sac.

I could see the heath and houses on my left, so civilization was technically close. However, in practice, they might as well have been on a different planet.

The brambles made it clear that there was no way through. Discouraged, I retraced my steps, scrambling back up the slope. I felt I had wasted time and effort.

Before I joined the main path, I saw another potential path. It also did not look very promising, but I was in explorer mode.

This time the ground was boggy and waterlogged in places. Discarded cans indicated that someone else had been this way before.

I had to think carefully about where to place my feet. I could not afford to wander off in my mind, plotting and planning what I would do when I got home. I had to stay in the here and now.

At least there were less thorns to worry about –until I reached the end of the bog. I ended up in the thicket once again. I did not fancy retracing my steps along the water’s edge, but decided to find a way through to the heath.

I had to make my own path, which unfolded one step at a time. I zigzagged my way through, gingerly lifting thorny branches so that I could duck under them, occasionally breaking off a branch to make the walk less perilous, often stopping and studying my environment, planning my next step: Would it be easier to carefully duck under the branches on my right or climb over those roots on the left? Would what looked easier now get me into trouble a few steps down the line? There were those pesky thorns to consider wherever I turned.

Eventually, I made it back out into the open. When I looked back, there was no visible path. I will never be able to retrace my steps, but had the satisfaction of seeing a familiar environment from a new perspective.

It reminded me of the experience of writing our book. I was advised by a published author to focus on my story but wanted to include my husband’s perspective. I was keen for him to have his own voice, even though he had never written before.

I came up with the plan that we would each write a chapter every month independently of each other, and when I had all the material, I would figure out how our experiences could be interwoven. It took much longer than I had ever imagined to gather all the material, but what joy to discover moments when we had written about the same event from completely different viewpoints! The general feedback to date has been that it was worth stepping off a more traditional story telling path and that our two voices have added depth to the story.

Leaving a familiar, well-trodden path is hard work. It requires patience, presence, perseverance and courage. There is no guarantee of success. There is a possibility of failure – but also the possibility of new discoveries.

About the author: Susanne Irving is the co-ordinator for the Creative Communicators in Petersfield. She has co-written a book with her husband John about their experiences when climbing Kilimanjaro. It is aimed at both trekkers and those who are going through a dark time in their lives. How to conquer a mountain: Kilimanjaro lessons is available as a paperback and an e-book on Amazon, with all proceeds going to charity. The German translation Wie man einen Berg bezwingt: Was der Kilimanjaro uns gelehrt hat was published in June 2017.