We are His Stories, by Deborah Jenkins

By Deborah Jenkins - October 11, 2017
I arrived at the recent excellent ACW London writers' day an hour early. This was because one of the committee members, the lovely Fiona, was staying with me and needed to get there around 9. I could have stayed in bed and met her there later, but decided to go with her and loiter in a coffee shop. It would be nicer getting the train together. And after all, it was Saturday - the perfect day for loitering.

Having established where Bloomsbury Baptist Church was (I have missed the beginning of several writers days wandering, in concentric circles, around central London), I back-tracked to a cosy Costa and queued up to order my most luxurious treat - a regular full fat latte with a shot of caramel. While it was being assembled, a process which always, baffingly, takes a lot longer than I think, I noticed a sign in front of the till. Here is a photo of it: - 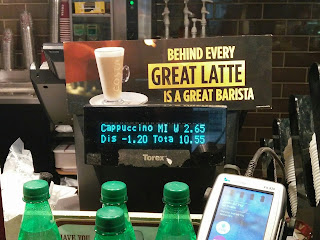 I watched my 'barista' carefully to see if there was any hint of greatness. I have to admit I am rather suspicious of the term as I don't actually know what it means or when it infiltrated daily usage so decisively - a coffee maker? Person who serves coffee? Person in a brown uniform with a brown beard serving brown coffee? My current barista had his back to me, was leaning tiredly towards the gurgling machine and seemed only to regain consciousness when, with a small explosion, it spat out a final mouthful and hissed wickedly. Well, it was early, on a Saturday morning and I am a Christian so I should always be generous. I smiled at him as he thumped the plastic cup down in front of me and thanked him pleasantly, resisting the temptation to ask if he thought he was a great barista, and just for the record, what was a barista anyway. Did he know if it was an Italian word?

Then, as I walked away, I inquired where the Ladies was.
"Upstairs," he replied angrily.
"Thank you so much!"

A few  delicious mouthfuls later, I was upstairs waiting outside the Ladies. Five minutes, then ten limped by while my precious latte cooled below. I tried the door again. Still locked. I peered into the gloom and noticed one of those key pad things high up in the top corner of the door. That was odd. I jabbed various keys randomly - clearly a fruitless exercise - then returned below.

"Excuse me, is there a code for the toilets?"
"Yes!" A receipt was banged down in front of me while a finger tapped an unreadable set of tiny numbers at the top. What? Was I supposed to actually read these and then key them into a key pad that I could hardly reach yet alone see, in order to get into the toilet? And, well you know, thanks for telling me earlier! Call me a grumpy old woman, but it all seemed rather ridiculous. All I can say is, Costa clearly isn't part of the community toilet scheme. I tried not to glare at the barista, and his sign.
"HUMPH! NOT!" I said loudly (in my head), and then went upstairs to key in my toileting plans.

I didn't think about it much more, until later. The writers' day, as already described, was wonderful. The speakers, Glenn and Emma Scrivener, were inspiring, the organisers brilliant, the book stall tempting, the attendees eager. I bumped into old friends and made new ones. I bought a copy of Sue Russell's latest book which I started on the train home and am already well into (A Vision of Locusts - you'd love it!) I had never been to Bloomsbury Baptist Church before though my husband has, and I was intrigued by the intensity of activity there on a Saturday. There seemed to be a kind of all-day choir practice going on above us and when I left, at 4.15, there looked as though there was a full-scale sermon going on in the packed main hall.

On the train home, I gazed out at a burst of sunshine silvering suburbia, trying to crystallise what I was taking away from the day. These are the things: -
The best stories, argued Glenn, are echoes of the oldest story of all - a world; it goes wrong; there is a fight; good wins. I have often felt a bit of a wimp when telling people that I don't want to read their recommended book if there's a sad ending. But it's actually OK to feel like that! Because that's the truth. At the end of the day, for the believer, however painful and broken and damaged we/the world becomes, there are no sad endings...

It's the latte thing but different. Behind every great story, there's a great story-teller. And it's not us, although He will use us to weave some of His magic in a love-starved world, through our words and our deeds and maybe even through our writing. Sometimes we'll muck it up, get it wrong, be grumpy to the customers (or the barista). But He'll use us anyway - a comforting latte on an autumn day - if we'll let Him.

He is the story-teller and we are His stories.

Please click on the link to see the novella on amazon

Deborah Jenkins is a primary school teacher and freelance writer who has written articles, text books, devotional notes and short stories. She also writes regularly for the TES. She has completed a novella, The Evenness of Things, available as an Amazon e-book and is currently working on a full length novel. Deborah loves hats, trees and small children. After years overseas with her family, who are now grown up, she lives in south-west London with her husband, a Baptist minister, and a cat called Oliver.