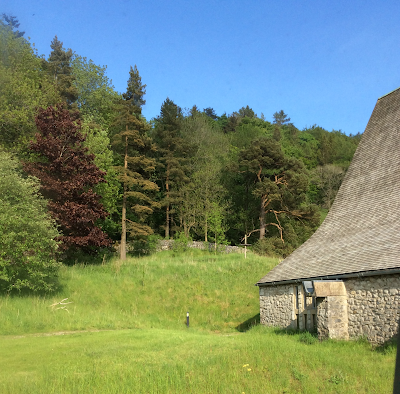 Isn't it funny how one thing leads to another?

In June 2016, I went to the ACW weekend at Scargill House with a half-formed resolution to write the homework set by the speaker and maybe even read it out. Scary.... Could I do it?

I teetered and wobbled, then inspiration came.

Oh blow it, I thought, I'm going to do this.

In a moment of madness, I told the organisers I'd like to read out what I'd written.

I had no idea what kind of reaction it would get, whether it would be any good or even if it made sense. But with grim determination I resolved to do this for me and for Jesus. The fact that I could even consider doing it was all down to what He had done in me, breaking the chains of fear and rejection, of believing I wasn't good enough.

The reading - a fictional account of a young woman who had been trafficked into sex work - brought about an unexpected conversation. A fellow writer wanted to know more of what I'd written. I explained about my volunteer work with the Jericho Road Project which works with women in the sex industry.

'You may have an idea for a book there.'

Really? I wasn't sure. Could driving a van around the red light district late at night, stopping to offer working women hot chocolate, ham and cheese sandwiches, and homemade flapjacks be book-worthy?

I prayed but remained unconvinced. Yet the idea wouldn't go away. Then a comment in a sermon by my then pastor Nick Sharp clinched it for me.

So I approached the trustees. Even though I was convinced they wouldn't be interested. But the trustees loved the idea of Jericho Road's story being published.

For the last year I have been busy researching, interviewing past and present staff members and volunteers and reading old newsletters. Piecing together how the project came into being and the difference it makes in the lives of these precious women has been fascinating. 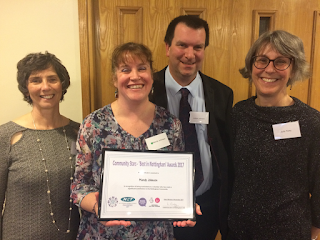 Come February, most of the research should be done and I plan to start writing the book. Jericho Road's story is remarkable: birthed in prayer and abounding in compassion for the gutsy women who find themselves trapped in terrible circumstances.

In anticipation of the book, and in celebration of all of Jericho Road's volunteers, I was one of several nominees at an awards ceremony at Nottingham's Albert Hall this evening. It was an honour to be there.

All of this came from one small act of stepping out in faith. Maybe God is nudging you to step outside of your comfort zone. Go for it. You never know what thrilling adventures He has in store for you.

Mandy Baker Johnson is a private medical secretary and freelance writer. She enjoys blogging and recently co-authored her first book, Drawn from Words. She volunteers with a Christian charity working with women in the sex industry, and is currently researching this area for her second book.
#ACW #ScargillHouse book comfort zone fiction go for it homework Mandy Baker Johnson sex industry