The other side of Advent, by Ben Jeapes 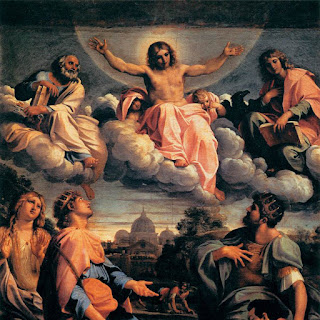 I freely admit that not all of what follows are my own thoughts. I’ve been working through The One True Story : Daily Readings for Advent from Genesis to Jesus by Tim Chester and recommend it to anyone.

Anyway. Let me now modestly attempt to give a definitive interpretation of some of the rampant symbolism of Revelation.

This Advent time, we’ve all probably sung ‘Lo, he comes with clouds descending’, maybe ‘Let all mortal flesh keep silent’. They’re traditional Advent hymns but they’re far from baby Jesus in the manager. They’re aimed at the second coming, not the first.

It’s easy to forget that the New Testament begins and ends with the birth of a child. Both the Matthew and Revelation birth stories feature the phrase ‘she gave birth to a son’ – after that, they diverge. The Gospel nativity stories in Matthew and Luke are intended as historical retellings. Revelation is the story from an eternal perspective.

In Revelation chapter 12, a woman is about to give birth. The dragon – ‘that ancient snake called the devil, or Satan’ – is poised to catch the child. The child is snatched away to heaven, whereupon war breaks out between Archangel Michael and the dragon and his angels. The losing side are hurled down to earth, and the dragon then gives chase to the woman who gave birth. She is given the wings of an eagle to escape. The dragon spews out a mighty flood of water to overtake her, but the ground opens up and the water is swallowed.

The phrase ‘that ancient snake’ suggests this is the snake from the Garden of Eden. God predicted then that the devil would strike at the heel of the woman’s offspring, and he would crush its head. The woman gives birth and the child is snatched away from the devil. God raised Jesus from the dead and snatched him up to heaven. The battle in heaven is the fruit of the battle that took place at the foot of the cross. The bruising of Jesus is the crushing of Satan. So Satan turns his attention on to God’s people, the church – the devil pursuing the woman. And he would have destroyed the church long ago if God was not protecting it. John pictures the protection as the eagle’s wings and the swallowing up the water. The church survives, even though many of its members are persecuted.

But I might not mention it at the Christingle service. There’s a time and a place.

Ben Jeapes took up writing in the mistaken belief that it would be easier than a real job (it isn’t). Hence, as well as being the author of 5 novels and co-author of many more, he has also been a journal editor, book publisher, and technical writer. www.benjeapes.com
Advent Revelation stories Writing