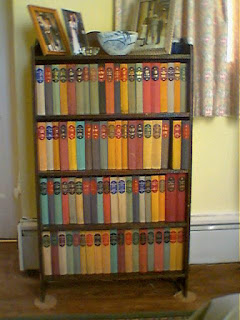 This week I tried to fire up an iPod that has lain flat for five years or more. Not a chance - it’s completely dead, everything on it lost forever. (Though hardly the end of the world, as the only reason it has lain flat for the last five years is that I upgraded to another and took all the content with it …)

That’s technology. But books, eh? As long as you can make out the squiggles on the page, a book will keep its content perfectly accessible until the end of time. (And the sheer smell and feel of secondhand paper is just one reason why e-books will never replace the real thing.)

Like my grandparents’ book club collection. Around the mid to late 1950s my grandparents seem to have been members of the Companion Book Club, which seems to have undertaken to provide you with a cracking read from an eclectic range of authors in a standard, hardback format on a regular basis. And we have the books to prove it – about 80 of them in a bookcase that fits them exactly. Or maybe there were more than 80 once and the rest got chucked because they didn’t fit in. Anyway. I can’t remember a time I wasn’t aware of this lot, because I can’t remember a time I didn’t know my grandparents’ house. The bookcase always stood next to the door into the living room.

I first read one when I was about 11 or 12 – I’d heard of Douglas Bader and I noticed one of the books was Reach for the Sky. I explored a little further, but not much – basically the three Alistair MacLean novels, HMS Ulysses, The Guns of Navarone and Night Without End. Then for some reason I stopped, probably because I spent most of the next 30 years reading science fiction. And then I inherited the bookcase and its contents.

And a host of other authors I’ve never previously heard of. Maybe I should just start at the left end of the top shelf and work my way along.

The bookcase makes a pretty collection but it’s no good to anyone just sitting there. Hundreds of thousand of words have been trapped between these clothbound covers for over fifty years. It’s time to set them free.