Ghosts in the machine, by Ben Jeapes 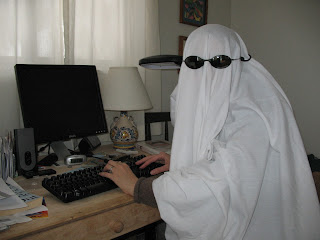 The late Jade Goody was on a chat show to promote her autobiography, and is said to have prefaced an anecdote with “I don’t know if this is in the book, but …”

Terry Pratchett’s advice to booksellers includes the hint that if a TV personality is in store signing their new opus, “don't pass comment if they spend a lot of time reading their book while they're in the shop. It may be the first time they've seen it.”

With a little trepidation, and hopefully not too much pre-emptive self defensiveness, I want to talk about ghostwriting - the art of hiring someone else to write your book. (See Robert Harris’s The Ghost for how this can go horribly wrong …)

Christian publishing has a very open tradition about ghostwriters - they’re usually there on the front cover after the author’s name (“by Brother Andrew, with John and Elizabeth Sherill”), emphasising the partnership aspect. And why not - there are more important Christian stories to tell than there are Christians gifted in writing to tell them.

It perhaps gets iffier if the ghostwriter’s name doesn’t appear anywhere prominent, or at all, leading to the impression that the name on the cover did all the work. If that name is some celeb whose name alone guarantees the sale, is that not passing off? A question I had to ask myself a few years ago when I was offered a ghostwriting job.

Personally, well, I’d be lying if I said the money wasn’t attractive, and if it wasn’t for that initial incentive then I wouldn’t have had to think any further. But I had got married in the faith that God would help me provide in my new roles as husband and stepfather, and guess what, out of the blue he did.

Philosophically, I believe that a world with books in it is better than a world without, so in terms of pure utility, I make the world a better place by writing them. The brief was for a series of clean wholesome exploits linked with an individual whose name is already effectively a brand name for a particular adventure type, and by ghostwriting for him, I’m essentially copywriting for the brand.

Scripturally, I believe that if you’re a Christian with an artistic talent of any kind then that immediately adds another dimension to what you do. You have a God-given gift (which sounds kind of immodest, but it’s true) and you’re using it. I also believe it’s more Christian to be a hidden name in a team than the big name on the front cover - see 1 Corinthians 12:12-26.

Add it all together, and I was being paid to use my gifts to make the world a better place. So what do you think I did?

I have no idea how I would react or how my arguments would stand up if someone threw money at me to ghostwrite the next Katie Price bonkbuster, but I can confidently say I will cross that bridge when I come to it.

Ben Jeapes took up writing in the mistaken belief that it would be easier than a real job (it isn’t). Hence, as well as being the author of 5 novels and co-author of many more, he has also been a journal editor, book publisher, and technical writer. www.benjeapes.com
ghostwriting Writing