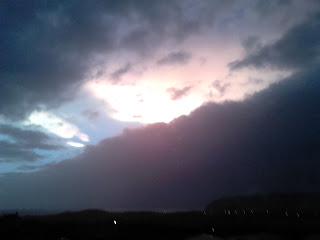 On Sunday afternoon - with Storm Henry forecast for the following day - we looked out of the window at 2.30pm and saw a barn owl flying in (not very bright) daylight. About four gulls were providing a menacing escort too close to it for comfort. Barn owls need dry weather to hunt, usually at dusk. This one must have been desperate to run the gauntlet of daytime scavengers.

A few weeks ago I noticed that my favourite sweater had gone missing. I looked everywhere. It was unlikely that I could have failed to put it back on if I had removed it away from home. (I had had my blood pressure taken at the doctor’s and been in other places, where I had felt too warm.) I began to ask people whether they had seen it. I had the opportunity to replace it and bought a similarly coloured tunic in the sales. I was glad to wear it at the writing group as I was over-heating in the jumper I had worn to travel and too cool in a blouse.

Losing things is very time-consuming. No, that’s not quite right. It is the work of a moment. Looking for lost items is what takes time. Procrastination is not the only thief of time. No wonder there is an old saying, ‘The devil will put it back when he’s finished with it!’

After about a month my jumper turned up under the mattress. No-one was looking for it. The regular turning of the mattress was due and hubby began the job. I was alerted by a cry of, “Look what’s here!”

At about 9:30 the same evening with Storm Henry raging, I was walking home from a choir practice with a friend. “Are those birds?” she asked.

Sure enough a flock of vociferous seabirds was flying across the road towards the sea (or some rainwater in a nearby field). “Oystercatchers,” she observed. Their white (tinged orange by a sodium-light) showed up against the dark sky. They were beautiful as they flew in close formation.

The only link between the owl and the jumper is that they were out of context. That is an expression borrowed from the literary world. As for the oystercatchers, they were a beautiful sight and I intend to research their habits. They too may have been out of context. Storm Henry has brought beautiful skies with nacreous clouds - as well as much disruption. Perhaps we should always look out for blessings even in troubled times and be thankful.

Have you ever found something in an unlikely place after you had given up any hope of finding it? Do you have a place for everything and everything in its place? Or perhaps, like me, you favour organised chaos…

The morning after the oystercatchers I shared the story about the lost jumper at our ladies’ Bible study on Luke chapter 15. Does anyone know whether oystercatchers regularly fly at night?

Previous Guest Posts by Susan Sanderson on More than Writers: