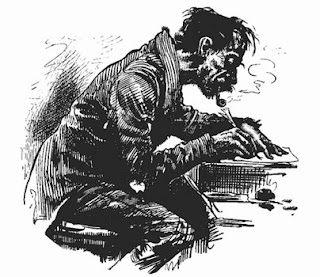 Short version: On 6th August 2015 I handed in my notice to become a full-time writer.

Slightly longer version: I’d always done my writing career on the side, in the mornings and evenings, before and after the day job. It was never more than handy pocket money, and I was happy because by and large the day job was something that I enjoyed.

Until 2015, when I was three years into a job that I wasn’t enjoying at all. I didn’t believe in it, I was bored and demoralised, I had zero inspiration to be creative in my own time, and this was noticeably affecting the quality of my work.

Then, out of the blue, a seed that had been planted a few years earlier in the sideline came to fruition, and I had a year’s writing work signed up at the equivalent of a year’s salary from the day job. I had no idea what would happen at the end of that year but I took the plunge.

I did the work, the contract duly expired, and along came a new one for the equivalent of a further two years’ salary. There’s now one year to go, I have irons in the fire for other titles, and there are whispers on the wind of further contracts.

Even if it all comes to a crashing halt in a year’s time, I’ve no doubt this was God’s provision. I’m doing what I’ve always wanted to do, via a route I could never have imagined. And there are other pointers.

During this time we’ve had to arrange some major rebuilding work on our home to make it sellable (which we could afford, thanks to savings accrued with the secondary writing income), deal with an extremely problematic neighbour, and move house twice. There was so much that required my presence at home: if I still had the job, a thirty minute drive away, it would have been horrendous. It seems to me that God simultaneously did the least and most that he could. He changed one little thing, and made everything else work.

Doesn’t that strike you as similar to the miracles recorded in the gospels? Jesus set them up so that first and foremost, God’s glory would be shown. He didn’t set people up with new homes and lives, but he removed the one obstacle to the fulfilment of their hopes and prospects, then kept open the channel that would allow them to continue to receive his blessings as they came.

Back in 2017, I’m very aware that God hasn’t provided guaranteed lifelong security. This is the difference between answering prayer as in the Bible and granting wishes as in fairy tales. We don’t get the happily-ever-after in this life: we’re expected to keep on trusting God. A two-year contract is about the most many people get even out in the world of day jobs. Hence he provides a very obvious opening to keep on trusting him.

It’s also become quite clear that he has thoughtfully provided us with another awkward neighbours situation, just to keep us focused.

So with full sincerity and only slightly gritted teeth, I say, thank you, God.