Answers in time and space, by Ben Jeapes 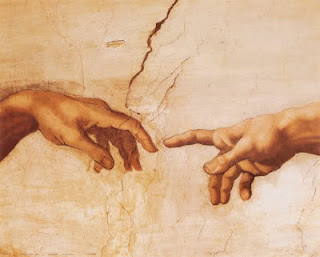 I was surprised once to be having a conversation with a young earth-believing friend and hearing her rationale. It’s not that she question the science; it’s not the perceived challenge to the authority of scripture. She is young earth because, in her view, the old earth view is a step away from Jesus.

I still think old earth is correct, but I’m glad we had that conversation.

There is plenty I could have said. In my younger days I might have said something like “but any fool can see that …” Fill the rest in yourself. I’m glad I didn’t call her a fool, because she isn’t, and anyway I was a guest in her home.

More cunningly, I could have asked her if she would rather have spent the last 13 years raising her son, from conception onwards, observing him grow day by day, hour by hour … or just have him handed to her on a plate, aged 13? But it’s generally good practice not to ask leading questions when you don’t already know the answer.

I could have argued for the scientific evidence. I certainly don’t buy the mental gymnastics required of the likes of Answers in Genesis or any kind of creation science. Never have, never will. But frankly there's not a lot of point because a young earther has already considered the science, or their perception of it, and will have an answer to anything you throw at them. And you’ll probably find most science would suggest crucifixion victims don’t resurrect three days later, so go careful on that one.

But bringing in Jesus meant that ultimately we could respect each other’s different views.

But hold on, you may say, one or the other must still be right! So ultimately, one of you is wrong, and that’s all there is to it.

If we hadn’t had that conversation, and I hadn’t started thinking in terms of Jesus, I’d never have thought this. You see, both young earth and old earth believers forget the full implications of the Fall. The Fall totally screwed up creation. All of it. Think about it. All of creation.

Yes, time is part of creation. We think of it as nice and linear so that you can trace a sequence of events all the way back, in principle, to the start of creation. But we can’t. It’s like following a nice straight piece of string until suddenly it dissolves into an impenetrable knot. Everything that lies before that knot can only be expressed symbolically, if our post-lapsarian comprehensions are to grasp it.

But I stick to my old earth view, not just because of the science but because, ultimately, to me, old earth is simply better than young earth. We’ve all read “The heavens declare the glory of God.” Well, quite! Old earth blows my mind. It is fantastically, utterly, stupendously awesome. Hence it reflects greater glory on God, and brings me closer to Jesus. Young earth, not so much.

Old earth is simply a better story, and as we owe God the best of everything we can offer, that includes the best story we can tell.